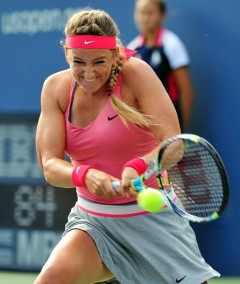 September 3, 2013 ITS Staff: New York - World No. 1 Serena Williams put on a display of fire-power making another statement that she’s the player to beat after demolishing Spain’s No.18 seed Carla Suarez Navarro 6-0 6-0 on Tuesday to advance to the semi-finals against China’s Li Na.

The 16-time Grand Slam champion Williams, who is bidding to win her fifth Flushing Meadow title, hit 20 winners, and won 88 percent of her first serves including four aces. According to the U.S. Open record books, the last time a quarter-final match was decided by a double bagel was in 1989 when Martina Navratilova blanked Manuela Maleeva of Bulgaria.

World No.2 Victoria Azarenka rallied past Ana Ivanovic 4-6 6-3 6-4 to advance to the quarter-finals of the U.S. Open Championships on Tuesday at the Arthur Ashe Stadium.

After dropping the first set to Ivanovic who came out firing, the reigning two-time Australian Open champion clawed her way back steadily into match winning the second set mostly on the Serbian’s unforced errors. In the final set, the Belarusian stormed to a 3-1 lead before Ivanovic leveled back at 3-all. Azarenka, the last year’s finalist, held serve then broke to serve for the match at 5-3 but squandered two match points before Ivanovic closed the gap 5-4.

Ivanonic appeared on her way to hold serve with a 30-0 advantage before Azarenka ripped a cross-court return winner on the next point then subsequently got to her third match point. Ivanovic saved one but on the fourth match point, the former World No.1 hit into net to give the match to Azarenka after two-hours and 10 minutes.

In a court-side interview with former U.S. top tenner Brad Glibert of ESPN, Azarenka described her match, “Ana just came out firing and played amazing tennis in the first set. I really had to wake up in the second set and fight for the points.  I was really more determined, more focused. The match points were pretty bad.  I really didn’t go for my shots.  I kept waiting for mistakes, but they never came.”

Under tough conditions, Ivanovic hit 41 winners but also absorbed 42 unforced errors compared with her steadier opponent who only hit 21 winners but had less unforced errors at 30. Azarenka’s next opponent is unseeded Slovakian Daniela Hantuchova who defeated American wildcard Alison Riske on Monday. 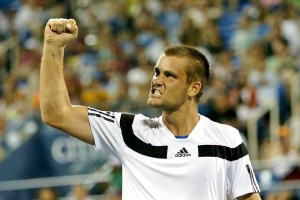 usopen.org: September 03 2013 by Clair Maciel - Holding a 4-1 lead over No. 21 Mikhail Youzhny in the fourth set, Lleyton Hewitt was two games away from securing a spot in the US Open quarterfinals for the first time in seven years. But when the tenacious Russian found his second wind and reeled off five straight games to force a deciding fifth set, Hewitt suddenly found himself fighting off a re-energized Youzhny.

Twice in the final two sets, Youzhny came back from the brink of defeat to quash Hewitt’s lead. When all was said and done, the Russian’s gritty baseline game earned him a 6-3, 3-6, 6-7, 6-4, 7-5 win over the 2001 US Open champion and secured his spot in the quarterfinals. Both men had proved to be dangerous in their quarter of the draw thus far, with two-time US Open semifinalist Youzhny knocking out an in-form Tommy Haas, and Hewitt taking down the No. 6 seed Juan Martin del Potro in the second round.

"There was a lot of momentum changes, right from the start," Hewitt said of the match. "He had a lot of different swings out there where we both played better at certain stages for three or four games. You know, it was hard for both of us to hold our serves at times as well out there. In the end, he played the big games when he needed to. He didn't give me too many cheap errors. It's obviously disappointing to lose, but, you know, I left it all out there. There's not a whole heap more I could have done." Full article