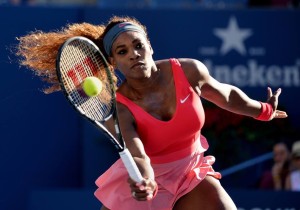 September 06 2013 ITS Staff: New York - Last year’s women’s singles finalists are back on the same stage at the U.S. Open Championships in Flushing Meadows after taking care of the their respective semi-final opponents on Friday.

Against Li, Williams stormed to a 6-0 1-0 before Li came back to level at 1-all then broke for 2-1, and getting up to 40-0 in the fourth game. Somehow, the tide went back to Williams’s favor clinching the game en-route to a 5-2 advantage. Li managed to fight off six match points with spectacular winners to narrow the gap at 5-3 before Williams served out the match with solid serves.

In a court-side interview Serena said, "Li Na's such a great player, it was tough at the end of the match and I got a bit nervous but I was able to close it out finally.”

Li Na later on in an interview said she had jitters coming into the last four and admitted she could have lost to any player she played on Friday. 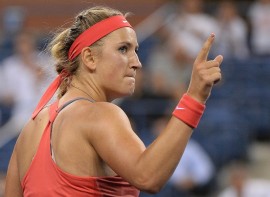 Qouted by Ian Ransom of Reuters, “It's not about the technique. It's about the problem with myself. First time in the semis, I was thinking about the situation. Today, it doesn't matter who the opponent is. The problem is myself,” said the former French Open champion.

Li continued, "Even if today I was playing against (a player with) the ranking of 100, (there would) still (be) the same problem. When I walked to the court, I was feeling like the court was so big. My side was feeling like a football court. I cannot focus. In the end, finally I can play tennis."

As for Azarenka, the win over Pennetta wasn’t as pretty as she would have liked. She committed 18 unforced errors and served five double faults. She’ll take the win, though, as the former World No.1 is now through to her fourth Grand Slam final going 2-1.

Appearing in her first Grand Slam semi-final, Pennetta, who came back from a wrist surgery and her first Grand Slam semifinal, said after the match, “It has been a good tournament. Today I had my chance. I didn't make it in the first set but I was playing well. I think she was really consistent today. We both didn’t serve well but in the end it was a good fight. I'm really happy about the tournament, how I played. Today I lost against the No.2 in the world. I tried my best. It  was nice to see for the fans and everything. I really tried until the last point.” 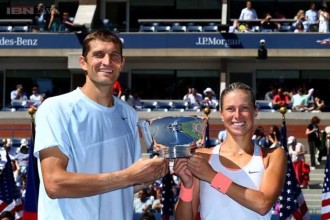 usopen.org: September 6, 2013 by By McCarton Ackerman - No. 7 seeds Andrea Hlavackova of Czech Republic and Max Mirnyi of Belarus are the first champions at this year’s US Open, fighting off three set points in the opening stanza on their way to claiming the mixed doubles title with a 7-6, 6-3 win over American Abigail Spears and Santiago Gonzalez of Mexico. “Max was unbelievable today,” said Hlavackova. “He was covering 80 percent of the court, so it was easy for me to come up with some magic returns.” Hlavackova wins her first-ever mixed doubles title and first US Open title with this win, while Mirnyi wins his third US Open mixed doubles title and 10th Grand Slam doubles title overall. Hlavackova-Mirnyi will split the $150,000 winner’s check and Spears-Gonzalez will split $75,000 for their finalist showing. Full article