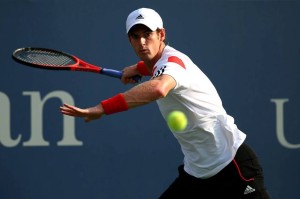 September 01 2013 ITS Staff: New York - Defending champion Andy Murray eased through to the fourth round of the U.S. Open on Sunday with a straight set victory over Florian Mayer 7-6 (7-2), 6-2, 6-2 at Arthur Ashe Stadium. The reigning Wimbledon champion Scot hit 42 winners, served-out seven aces and also did lose his serve in a match which went under two hours.

World No.1 Novak Djokovic continued to put his name as the favorite to win the 2013 US Open by demolishing Joao Sousa in the third round 6-0, 6-2, 6-2 on Sunday evening. The Serbian star, who is looking to maintain his top-ranking and who is bidding to win his second major title of the year, has now reached 18 straight Grand Slam fourth round. Djokovic will face Spain’s Marcel Granollers who came from behind to defeat the last male American standing in the tournament Tim Smyczek 6-4 4-6 0-6 6-3 7-5.

Fifth-seeded Tomas Berdych cruised in his third round match against Frenchman No. 31 Julien Benneteau 6-0, 6-3, 6-2. Berdych will now face No.9 seed Stanislas Wawrinka who battled hard to eliminate Marcos Baghdatis, 6-3, 6-2, 6-7 (1-7), 7-6 (9-7) in three hours and 11 minutes. The Swiss No.2 appeared headed to an easy straight-set win but Baghdatis worked his way back into the match and brought the momentum in his favor when he broke Wawrinka in the first game of the fourth set. The Swiss, however, hung tough before clinching the match in the tie-breaker 9-7. The fourth set alone, which included several twenty-shot rallies, took 72 minutes. 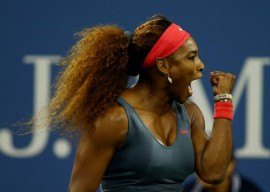 The 31-year old Williams won eight of the last nine games of the one hour and half match and thus advance to the quarter-finals  where she will meet No.18 seed Spaniard  Carla Suarez Navarro who upset German eighth seed Angelique Kerber 4-6, 6-3, 7-6(3). Regarded as one of the greatest tennis players of all time,Williams holds the most major singles, doubles, and mixed doubles titles combined amongst active players, male or female.

In a night match at Arthur Ashe Stadium, China’s Li Na barged into the quarter-finals of the U.S. Open Championships after crushing former World No.1 Jelena Jankovic 6-3 6-0. Li, who came into the match 0-4 against Jankovic since the 2009 French Open, yielded two of her service games but broke the Serbian seven times to finish the match 57 minutes.

Li was quoted after the match, "The last time I lost in straight sets in Rome. She plays good defense but who knows, maybe I played the best match of my whole life. I know Jelena is always a tough opponent and until the umpire says 'Game, set, match,' everyone has a chance," added Li. "I hope to just keep this same level for my other matches."

Li will next face No. 24 seed Ekaterina Makarova of Russia who upset No.3 seed Agnieszka Radswanka 6-4 6-4. Li leads their head-to-head 3-0 and Makarova has never reached a Grand Slam semifinal in singles. All of Li’s win over Makarova have come on hard courts, including a three-set triumph during the 2008 US Open. 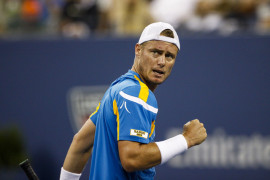 The former World No.1 is now through to the last 16 where the 32-year old will appear for the eighth time against Mikhail Youzhny who ousted No. 12 seed Tommy Haas 6-3, 6-2, 2-6, 6-3 played at the Louis Armstrong Stadium in a battle of 30+ year olds. The 31 year old Russian has now reached the fourth round of a major tournament for the third straight time since Roland Garros and Wimbledon. Donskoy, 23 years old, who was making his US Open debut, also appeared in the third round of the Australian Open earlier in January.

World No. 3 Murray paid tribute to Hewitt’s come-back efforts, as quoted by ATP Tour, saying, “I was pleased to see Hewitt playing so well. It's great. I practiced with him quite a lot, spent quite a bit of time with him over the grass court season.

"He works hard, he loves competing... he's a great player. People are quick to write guys off and not remember how good someone like Hewitt was at his peak.  He finished No. 1 in the world two times at the end of the year, won a couple of Grand Slams, and has been in the finals of others. When he's fit and healthy, he can compete with everybody," said Murray.

usopen.org: No. 24 seed Ekaterina Makarova pulled off the biggest upset of the women’s draw so far, shocking No. 3 seed Agnieszka Radwanska 6-4, 6-4 to reach the quarterfinals for the first time at the US Open. This win wasn’t the first time the 25-year-old Russian has knocked out a Grand Slam favorite. At the 2012 Australian Open, Makarova scored a notable win over Serena Williams in the fourth round. And on Sunday night, Makarova proved to be the more assertive player, striking 28 winners to Radwanska’s 18. Read full article