September 07 2013 - Richard Gasquet has never beaten Rafael Nadal in an ATP World Tour-Level match now at 11-0 in head-to-head matches. Most recently in this year's U.S. Open semi-finals. Gasquet, however did have a win over Nadal when both were 13 years old. Here's a clip from that match. Video courtesy of WorldClassTennis1 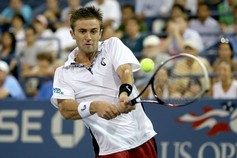 September 02 2013 - When Marcel Granollers rallied from 1-4 down in the fifth set to defeat the last male American standing in the tournament Tim Smyczek 6-4 4-6 0-6 6-3 7-5 on Sunday, it marked for the first time that no American male player reached the fourth round at the U.S. Open. Despite hitting 73 winners, Smyczek squandered 64 unforced errors in the three hours and 44 minute marathon match. The two top-ranked American No. 17 John Isner and No.31 Sam Querrey failed to advance past the third round. Young hopefuls Ryan Harrison and Jack Sock, a 20-year-old Nebraskan, fell to Rafael Nadal in the opener and veteran Janko Tipsarevic in the third round respectively. Read more

Blake's career comes to an end... 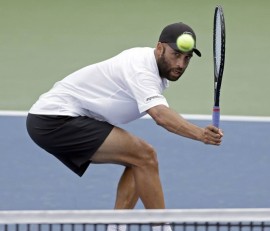 August 29 2013 - Former World No.4 James Blake ended his career on Thursday bowing out in the men’s doubles with American partner Jack Sock 4-6, 6-2, 6-2 in the opening round to second-seeds Bruno Soares and Alexander Peya. Blake, who will turn 34 in December, ended his singles career on Wednesday night at after a 6-7(2), 3-6, 6-4, 7-6(2), 7-6(2) defeat to Ivo Karlovic on Louis Armstrong Stadium. Quoted by the ATP Tour Roger Federer and Rafael Nadal paid their tribute to their peer:

Roger Federer: “I really have enjoyed playing against James… I've had some good matches against him. Maybe the biggest matches of his career, except maybe the match he played here against Agassi. Cincinnati, Shanghai. I've had some big matches against him, also the Olympics where he beat me. We go way back. We always used to practice a lot together, have good times on tour. So I'll miss him, but he's probably going to stay around tennis some. That's good to hear.”

Rafael Nadal: ”James was one of the more charismatic players on tour. His style of game was spectacular a lot of days.  He was able to play winners on the return with great first serves, and his forehand was one of the best on tour.  Without [a] doubt, he was able to hit very hard.  His image was great. He's a good example for the kids and a good example for the tour. He's a really good person.

Brit Evans takes revenge on Tomic's dad August 29, 2013 - World No.179 Daniel Evans of Great Briatain, after his 1-6 6-3 7-6 (7-4) 6-3 upset win over Australian Bernard Tomic in the second round of the U.S.Open, claimed that Tomic's dad John had refused to allow him to practice with Bernard in Miami last year. As reported by Linda Pearce of The Age, "It was quite funny actually. I was there playing qualies (qualifiers). His dad sort of fobbed me off and said I wasn't good enough to practice with him, yeah. We went to practice, it was all booked. Got to the court, in Miami, there's a little practice hut. I got to the practice hut. 'No, no, he's a qualifier, I'm not hitting with you'. So it was one of those. A bit embarrassing, but hey," said Evans upset World No.12 Kei Nishikori in the first round.

Fairy tale run ends for young Duval- Two days after the 17-year old became an instant celebrity after stunning former U.S. Open champion Samantha Stosur of Australia in the first round, Victoria Duval’s short but sweet run came to an end on Thursday as she fell to Daniela Hantuchova, 6-2, 6-3 in one hour and 12 minutes. Quoted in a post-match interview Duval said, “Winning my first round was quite an achievement and I am really proud I’ve been able to give myself not only a good image on the court but off the court. I was touched by all the little kids that came up to me and told me that I’m their role model. I think for a 17-year-old, that’s pretty cool to hear.”

Fans support for Isner foe, a downer: John Isner was not  amused on Thursday’s match when the spectators were backing his French opponent Gaels Monfils the Associated Press reported yesterday. “An American man playing at the American Grand Slam tournament, John Isner found it hard to believe so many U.S. Open spectators were cheering so vigorously for his French opponent, Gael Monfils. They clapped rhythmically while chanting, "Let's go, Monfils!" They loudly sang his last name between points. They rose to their feet and raucously saluted Monfils' best shots. They applauded faults and other miscues by the 13th-seeded Isner, the highest-ranked U.S. man, who eventually pulled out a 7-5, 6-2, 4-6, 7-6 (4) victory Thursday night. "I was a little bit disappointed in that, actually. Not going to sugarcoat it," said Isner, who reached the third round at Flushing Meadows for the fifth consecutive year. "If I was playing in France, it certainly wouldn't be like that."

Hunger for young American tennis stars: August 28, 2013 - Barely 24 hours after young American Victoria Duval upset 2011 U.S. Open Champion Samantha Stosur in the first round on Tuesday, the media in the United States lit up predicting the 17-year old lass as America’s next tennis icon. Eric Dodds of TIME Sports wrote: Could Victoria Duval be the Next Big Thing in American Tennis? Then Merlisa Lawrence Corbett of the Los Angeles Times followed with: Why Victoria Duval Will Not Be Another Melanie Oudin. > Also see Day 3: Radswanka, Li Na enter third round

Upsets, bagels, and a golden set... 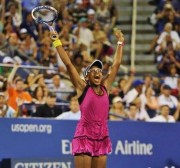 A star is born: August 27 2013 - American teen-ager Victoria Duval, who upset 2011 U.S. Open Champion Samantha Stosur of Australia 5-7 6-4 6-4 on Tuesday, saw her father survive through the rubble of the 2010 Haiti earthquake. The 17-year old Duval grew up in Haiti before immigrating to the United States in 2002 when she was eight years old. Duval was playing in only her second grand slam match. Last year she lost in the first round to Kim Clijsters. More on Day two

No.2 Azarenka delivered bagels for the night. Photo cincytennisopen.com

Double-Double Bagels: Second seed Victoria Azarenka blanked No.99 ranked Dinah Pfizenmaier of Germany 6-0 6-0.  The former world No.1 Azarenka is the reigning Australian Open champion and was finalist to Serena Williams here last year. After struggling to break serve in the opening game Azarenak romped on the rest of the evening needing only 55 minute to close out the match. Another player to record a double-bagel earlier Tuesday was 2012 French Open runner-up Sara Errani of Italy who dismissed Olivia Rogowska of Australia 6-0, 6-0 in the first round. More on Day two 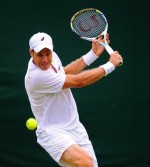 “Golden Set” achieved in U.S. Open qualifying rounds: Julian Reister of Germany posted a “gem” by winning the final set without losing a single point over countryman Tim Puetz (6-7[3], 6-4, 6-0). So far according to the U.S.Open, only five perfect sets have been recorded in professional level history. Twenty-four straight points is pretty much a statistical “fluke” considering 65 percent of tennis points are won or lost by an error or unforced error.

August 26 2013 New York - James Blake announced his retirement from tennis during a news conference at the opening day of the U.S. Open on Monday. "This is my last tournament. I don't want to be dragged out of this game. I want to leave on my own terms. I really didn't think this would happen,” the 33-year old former World No.4 said as he wiped away tears. Blake faces Ivo Karlovic in the first round... Read more

Bernard Tomic conquers self, 5-set battle in opener: From The Age: “Bernard Tomic has done his best to scupper suggestions he is a tanker after an epic five-set fight-back win in his opening round US Open match on Monday. After being accused of tanking at last year's tournament, the world No.52 fought back from two sets to one and a break down to win against Spain's Albert Ramos 6-3 3-6 4-6 7-6 (7-1) 6-3 in a tussle lasting almost four hours” …full article

Radswanka takes opening honor: World No.4 and third-seeded Agnieszka Radwanska registered the first win at the U.S.Open on Monday after cruising past Silvia Soler-Espinosa 6-1 6-2 in 63 minutes on Monday. Radswanka, who has never made it to quarter-finals here, took the honor of playing the tournament's first match at Arthur Ashe Stadium. She improved to 28-2 in Grand Slam first round matches.