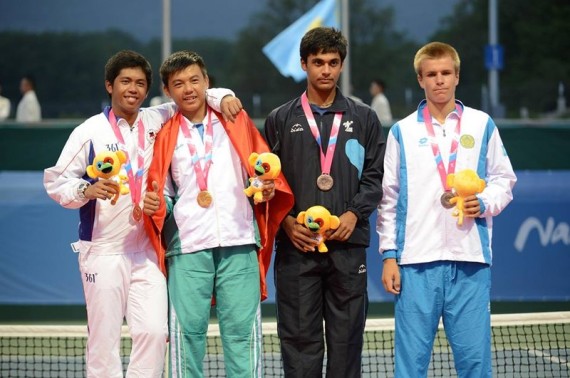 August 23, 2013 ITS Staff: Nanjing, China - Fourth-seed Hoang Nam Ly of Vietnam rallied past second-seeded Jurence Mendoza of the Philippines to capture the Gold Medal of the Men’s Singles competition of the Asian Youth Games in Nanjing on Friday. After a first-set loss, the ITF No.142 ranked Ly hung-on to deny the No.89 ranked Mendoza 6-7(4) 7-5 7-5 in a three-set thriller.

“I couldn’t get it done today, but all credit goes to Ly for a great match. Congratulations,” said the 17-year old Subic-trained Mendoza who settled for Silver Medal.

En-route to the Gold-Medal round, Mendoza conceded a set in four matches while Ly stormed to the finals without losing one. After dropping his first-set loss of the games, Ly broke Mendoza’s serve on the eleventh game of the second and final sets to clinch the coveted prize after almost three hours held at the Tennis Academy of China tennis courts.

“It was such a long match, every set was so hard. I feel really happy to win. Also I feel it’s the best reward for the people who love and support me,” said the 16-year old Ly whose best ITF finish was a quarter-final appearance at the 2013 Copa del Café in Costa Rica, an ITF Grade One event earlier in January.

Ly reached the finals by beating Dimitry Popko of Kazakhstan 7-5 7-6(2) in the semi-finals and Mendoza defeated India’s Batra Garvit 6-4 6-7(2) 6-0 in the other semis. In Women's Singles, No.2 seed Sun Ziyue of China took the Gold over compatriot fifth seeded Wang Yan 6-4 6-0; Bronze medalists are Dair Assiya of Kazakhstan and Buayam Kamonwan of Thailand. 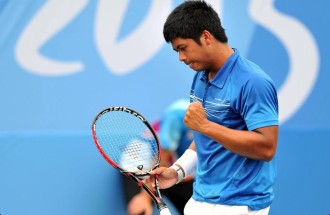 17-year-old Mendoza to go for Gold on Friday. Photo courtesy of Justin Mendoza

August 22, 2013 ITS Staff: Nanjing, China - Jurence Mendoza of the Philippines entered the finals of the Men’s Singles competition of the Asian Youth Games in Nanjing after a three-set victory over India’s Batra Garvit 6-4 6-7(2) 6-0 on Thursday held at the Tennis Academy of China in Nanjng.

The Subic-trained 17-year old Mendoza will now play for the gold-medal on Friday against No.4 seed and ITF junior ranked No.142 Hoang Nam Ly of Vietnam who reached the finals after beating Dimitry Popko of Kazakhstan 7-5 7-6(2).

It was the first time the No.89 ITF ranked Mendoza conceded a set in four matches through-out the games. Garvit, ITF ranked 244, extended the match to three-sets by refusing to hand Mendoza the match without a fight.

Philippine coach Martin Misa of ITS Subic said, “Give credit to young Batra, he refused to give up, but in the end Jurence also has a big-heart and showed guts by being able to take his game to a higher level.

“These are the qualities we want to see in our youths. Congratulations to both of them. I see a bright future for them,” added Misa who has coached Asian and Southeast Asian gold-medal winners and ATP Tour stars Cecil Mamiit, Eric Taino, and ATP World Tour Doubles elite Treat Huey. > Singles Draw > Official Website

August 21, 2013 ITS Staff: Nanjing, China - The future of Asian sports with more than 3,600 athletes aged between 14 and 17 years from the 45 countries and regions of the Olympic Council of Asia - took center stage in the 2nd Asian Youth Games in Nanjing .

In the men’s tennis competition, Philippine No.1 Junior player and ITF ranked No.89 Jurence Zosimo Mendoza reached the semi-finals on Wednesday held at the Tennis Academy of China tennis center after crushing Hong Kit Wong of Hong Kong 6-1 6-2.

Wong said after the match, “There was no pressure. It was my first time to play against such a player with high ranking like Mendoza. I couldn't catch the rythym of the opponent, still, I enjoyed the match like I always do."

The 17-year old Subic-grown Mendoza, who now enters the medal rounds, will next play India’s Garvit Batra for a place in the finals. Batra, ranked ITF No.244, defeated Roman Khassanov of Kazakhstan 6-1 6-1 in his quarter-final match.

According to Philippine coach Martin Misa of ITS Subic International Tennis Center, Mendoza has conceded only 5 games in three matches and is favored to win against the 16-year old Batra. Batra, however, had earlier upset local No.7 seed Zhouyang Qui of China in the round of 16 after rallying from a disastrous first set to win 1-6 6-2 7-5. See Singles Draw > Official Website