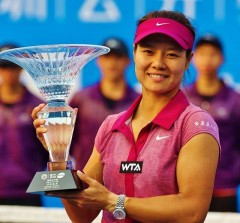 wtatennis.com January 4, 2014 Shenzen - With sharp play at the tail end of each set, Li Na scored the first successful WTA title defense of her career, edging Peng Shuai in an all-Chinese final at the Shenzhen Open.

For most of the match Li was in the driver's seat - from 3-4 in the first set she won seven of the next eight games to build a 64 41 lead. The No.5-seeded Peng made a big push from there, reeling off four games in a row to lead 5-4 in the second set, but the No.1-seeded Li hung on, sneaking out three long games of her own to close the match out in straight sets after an hour and 49 minutes, 64 75.

Li collected the eighth WTA title of her career, and first since winning this same tournament last year. And though she won her first Grand Slam title at the French Open, the Australian Open may be an even better tournament for the World No.3 - she has reached the semifinals or better there three times and has more wins at that major than any of the majors (27 - she has 20, 17 and 17 at the other three).

And there was another special thing about this victory for Li - almost eight years ago she came out on the losing end of the first all-Chinese WTA final, having to retire against Zheng Jie in the final of Oeiras in 2006 due to heat illness. Now, in the second all-Chinese WTA final, she came out a winner. Peng was looking for the elusive first WTA title of her career. She is now 0-6 in WTA finals.

wtatennis.com January 03 2014 Shenzen, China - Fans at the Shenzhen Open will watch two of their homegrown heroines duke it out for the title on Saturday, after China's Top 2 players, Li Na and Peng Shuai, reached the final. The No.5-seeded Peng was the first to move through, though it certainly wasn't the way she wanted it - she received a semifinal walkover from Vania King, who had to pull out due to a right thigh injury.

King's win over the No.7-ranked Errani in the second round was the biggest win of her career. It was her second overall Top 10 win - she had beaten a No.10-ranked Marion Bartoli at Seoul back in 2011. The No.1-seeded Li followed Peng into the final later on with a 61 63 win over No.8 seed Annika Beck. Things started getting trickier late in the match - Li was originally up 61 50 before dropping three straight games - but she regrouped just in time, breaking the pattern with a comprehensive hold at 15.

And so, the second all-Chinese final in WTA history is set - and it may come as no surprise that Li was also part of the first one. It came at the clay court event in Oeiras in 2006, where Li was forced to retire against Zheng Jie because of heat illness. Li leads Peng in their head-to-head series, 5-1, including 4-0 on Chinese soil. Official Website 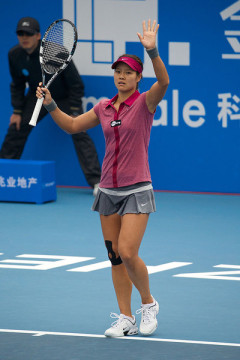 January 02 2014 ITS Staff Shenzhen, China -  Defending champion Li Na of China advanced to the semi-finals of the $500,000 Shenzhen Open Thursday with a hard-fought victory over Romanian Monica Niculescu 7-5, 4-6, 6-4 played at the Longgang Tennis Center.

“I had to work hard to find my rhythm today and play well against an opponent with such an unusual style of play. I need to play these kinds of matches before the Australian Open. This way I can make the necessary adjustments and increase my belief in myself,” said Li.

Friday’s semifinals will showcase exciting singles play with all four women skilled at shot-making. Li and Peng will come in more aggressive than their counterparts while Beck and King both play defensive styles and rely on consistency.