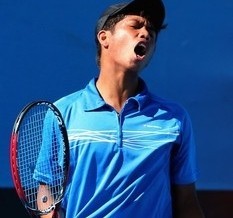 Sixteen year old Jurence Mendoza of the Philippines and doubles partner Park Long (Brian) Yeung of Hong Kong bowed out of the quarterfinals of the Australian Open Junior Boys Doubles Wednesday to Maximillian Marterer of Germany and Lucas Miedler of Austria 7-6 (3) 6-2.

The Subic Bay home-grown Mendoza and Leung secured a spot in the final 8 when they upset No.7 seeds Mackenzie McDonald of the United States and Mazen Osama of Egypt  7-6 (4), 1-6, 10-6 in the round of 16s after also trouncing the Chinese pair of Siyu Liu and Wei Qiang Zheng 6-4 4-6 10-8 in the first round.

In singles action, the No.57 ITF ranked Mendoza, who is mentored by ITS Subic’s Martin F. Misa, qualified and lost his first round match against World No.1 Junior Nikola Milojevic of Serbia 6-3 6-1.