August 03 2013 ITS Staff: Washington D.C. - Defending Champions  Treat Huey of the Philippines and Dominic Inglot of Great Britain fell short of their quest to repeat as Men's Doubles titlists at Citi Open Championships on Saturday’s semi-finals  losing to Julien Benneteau of France and Serbia’s Nenad Zimonjic, the 3-time Grand Slam Doubles winner, 6-3 6-4. The French-Serbian pair broke the UVA Cavaliers Huey and Inglot once in each set while saving two breakpoints they faced in the 58 minute match. More on Citi Open 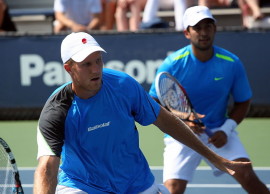 August 02 2013 ITS Staff: Washington D.C. - Defending champions  Treat Huey of the Philippines and Dominic Inglot of Great Britain took another step closer to a second Men's Doubles title at Citi Open Championships after a straight sets victory over Andre Begemann of Germany and India’s Rohan Bopanna 6-4 7-6(1) in the quarter-finals on Friday.

Huey and Inglot, who were NCAA All-American teammates at nearby University of Virginia, broke Begemann and Bopanna in the eighth game at love for a 4-2 lead in the first set then never looked back as they hung on to their service games in securing the opening set. In the second, both teams held serves strongly before the Filipino-British pair stormed to a 7-1 rout in the tie-breaker to close out the match in one hour and 12 minutes.

On Saturday in the semi-finals, Huey and Inglot will face the team of Julien Benneteau of France and Serbia’s Nenad Zimonjic who defeated Santiago Gonzales and Scott Lipsky 6-2 6-4. In the first round, Huey and Inglot had beaten the British pair Colin Fleming and 2012 Wimbledon Doubles champion Jonathan Marray 6-4 6-7(4) 10-7 while Begemann and Bopanna upset the No.1 seeds Alexander Peya and Bruno Soares 6-2 6-7(4) 10-5. More on Citi Open

August 01 2013 ITS News Update: American John Isner, the No. 8 seed, exacted revenge for his loss in the 2007 NCAA Singles Championships by defeating Somdev Devvarman 7-5, 7-5 in a round of 16 match on Thursday. Isner broke Dewarman once in each set while capitalizing on his solid service games never facing a single break point in the one hour and 34 minute match. More on Citi Open 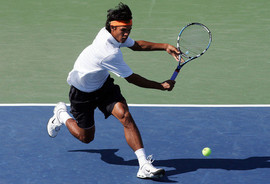 Isner was upset by University of Virginia’s Devvarman in a third set tie-break in the 2007 NCAA Singles Championship held in his home-court in University of Georgia having been seeded No.1 and favorite to win the tournament. Two months later the 6-foot-10 Isner was a surprise finalist here in Washington posting  five straight wins before falling to Andy Roddick.

Quoted by the ATP World Tour, Isner said, “Somdev’s a great player and he’s also a good friend, and I knew eventually our paths would cross. Now it’s happening here, sort of close to UVA, so he might have a lot of the crowd on his side. It’ll be a fun match and I’m going to need to play very well.”

Dewarman, who attended nearby University of Virginia with defending doubles titlists Treat Huey and Dominc Inglot, broke the No.9 seed twice in the first set then traded breaks in the second before hanging on to clinch the second set tie-breaker 7-4. Dolgopolov defeated Tommy Haas in last year's final to capture the title on his tournament debut. The 28-year old native of Assam, India enters the round of 16 where a probable match awaits against last week’s Atlanta winner and No.8 seed John Isner.

Dewarman defeated Rhyne Willams in the first round on Monday 7-5 6-1 after winning several matches in the qualifying rounds beating Jesse Witten 7-5 6-0 and last week’s Atlanta quarter-finalist Christian Harrison 6-0 6-1 in the first and second round respectively. Daily Recap > Scoreboard 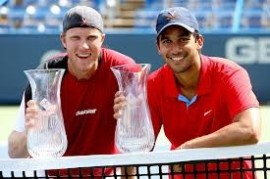 The Filipino-British pair served seven aces while breaking their opponents once in the first set before losing the second set tie-breaker 7-4. In the third set Match-tiebreaker, the former Cavaliers converted important mini-breaks then held on with their serves to extend their winning streak to five matches since last year's tournament win.

Huey and Inglot will now meet the winner between Top-seeds Alexander Peya of Austria and Brazil's Bruno Soares, and Germany's Andre Begemann and Rohan Bopanna of India, for a place in the sem-finals 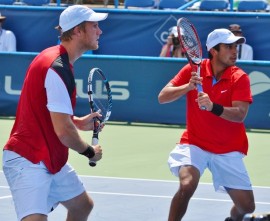 Currently the No. 22 team, the Filipino-British duo will try to win back-to-back titles. Huey and Inglot were both named NCAA All-Americans while attending nearby University of Virginia.

According to Sheena Pegarido of Citi Open media, "Top seed doubles team Mike and Bob Bryan, current world No. 1 and prior Washington champs, have withdrawn from the 2013 Citi Open due to Bob Bryan’s shoulder injury. The main draw includes the world No. 2 pair of Austrian Alexander Peya and Brazilian Bruno Soares, who have won six ATP titles together, as well as the No. 5 ranked doubles player Rohan Bopanna of India and his partner Andre Begemann of Germany. 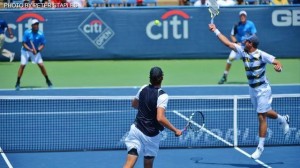 "The Citi Open is one of only 11 elite ATP World Tour 500-level events worldwide and the only one held in the United States. The event is also part of the prestigious Emirates Airline US Open Series, the five-week summer tennis season that links nine North American hard-court tournaments to the final Grand Slam of the year, the US Open. In addition, the Citi Open features a WTA International Tournament which provides fans the opportunity to watch simultaneous competitions of both world-class men’s and women’s tennis throughout the nine-day event. The tournament features 48 men’s singles players and 16 doubles teams, 32 women’s singles players and 16 doubles teams."

The tournament’s owner and beneficiary, the Washington Tennis & Education Foundation (WTEF), provides underserved children in the D.C. area with a safe environment to learn critical life skills both on and off the courts through academic and athletic enrichment. Daily Recap > Scoreboard