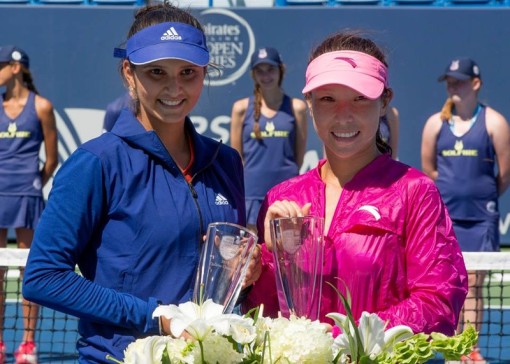 Mirza, Zheng bags first team title at New Haven Open. Photo newhavenopen.com
newhavenopen.com: August 24 2013 - New Haven CT - Sania Mirza and Zheng Jie captured the New Haven Open at Yale doubles title on Saturday, the No. 3 seeds beating second-seeded Anabel Medina Garrigues and Katarina Srebotnik 6-3, 6-4 in a high-quality affair.
It was just the fourth tournament the two had played together in their careers, a partnership that got its start this spring and has continued again this summer after a break. They'll play in the US Open together.
Mirza/Zheng raced to a 5-2 lead in the second set after capturing the first and looked like they would close out the match with the Chinese player serving. But Medina Garrigues/Srebotnik broke and then held, putting the pressure on Mirza to serve it out.
That she did, the Indian earning her second title in New Haven after winning here in 2007. Mirza now owns 17 doubles crown in 25 appearances. For Zheng, it's a 15th title in 28 finals.
Medina Garrigues/Srebotnik were playing for the first time this year. It was a competitive doubles draw in New Haven this week, with doubles legends like Liezel Huber, Lisa Raymondand Hall of Famer Martina Hingis all in action. Tough duos included well-known regulars Cara Black, Megan Moulton-Levy and Lucie Hradecka.
But in the end it was Mirza/Zheng who took the crown, dropping just two sets along the way. They split a winners check of $36,500. Full article > Halep Stuns Kvitova in New Haven Final 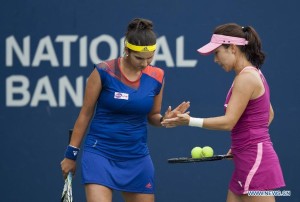 Espinosa and Navarro had upset top-seeds and reigning Wimbledon Champions Su-Wei Hsieh and Shuai Peng in the first round. In the finals, the No.3 seeds Mirza and Zheng will face Anabel Medina Garrigues of Spain and Slovakian partner Katarina Srebotnik who defeated American Liezel Huber and Spain’s Nuria Llagostera Vives 4-6 7-5 10-1

Both Mirza and Zheng will be playing the women's doubles event at the US Open next week. Mirza, currently ranked no. 17 in the world, has been playing mostly with American Bethanie Mattek-Sands this year but due to the American enjoying success in singles this year she has decided to focus on playing singles for the next few months.