ctopen.org: August 23 2014 New Haven, CT - Petra Kvitova’s path to her second title at the Connecticut Open presented by United Technologies was much like her first: It was dominant.

The Czech world No. 4 did not relinquish a set en route to the championship, defeating Magdalena Rybarikova 6-4, 6-2 on Saturday to cap off another impressive week in New Haven and win her second Connecticut Open title in the last three years.

Kvitova was broken twice in the first set, but returned the favor against the Slovak three times to edge Rybarikova in the first. Rybarikova kept the set respectable, closing in at 5-4 after saving two set points at 2-5 down and breaking Kvitova. But Kvitova was able to break the Slovak back for the set, winning it 6-4.

In the second set Kvitova put her foot on the gas, as she had for much of the week, playing all-business tennis and winning it 6-2, closing out the match in 69 minutes. Kvitova now moves her record here to 12-2 overall. She secures her No. 4 world ranking moving into the US Open, where she has an outside shot at claiming the world’s No. 1 ranking should she win the event (pending other players’ results, as well).

Rybarikova was the lowest-ranked finalist in New Haven history, the world No. 68 now bouncing inside the Top 50. She has been as high as No. 31 in the world.

ctopen.org: August 21 2014 New Haven, CT - Magdalena Rybarikova defeated Camila Giorgi 6-2, 6-4 on Friday afternoon to earn a berth into the 2014 Connecticut Open finals, becoming the lowest-ranked player in the event’s history to reach the finale, and producing the first premier-level finals appearance of her career.

However, they were able to hold 10-8 in the third to reach the finals. Klepac and Soler-Espinosa move on to face Marina Erakovic and Arantxa Parra-Santonja, who won in similar fashion over Caroline Garcia and Monica Niculescu, 6-2, 5-7, 11-9.

ctopen.org: August 21 2014 New Haven, CT – In a match-up of countrywomen, No. 2 seed Petra Kvitova upended Zahlavova-Strycova, 6-4, 6-1 to advance to the semifinals. Kvitova, the lone seed remaining in the field, displayed a dominant serve, winning her service points at an impressive 70 percent clip.

Magdalena Rybarikova continues her impressive stretch at the 2014 Connecticut Open. After defeating defending Champion and top-seed Simona Halep in the Round of 16, she took down American Alison Riske, 7-5, 0-6, 6-4 to reach the semifinals. She will face the winner of hard-hitting Italian Camila Giorgi for a place in the finals.

Giorgi defeated Spain’s Garbine Muguruza 6-4 6-7(4) 6-2. After failing to clinch the match in the second set tie-breaker, the 22-year old Giorgi broke her 20-year old opponent twice in the deciding set while saving two break points she faced in a match that lasted two hours and 15 minutes.

In the last quarterfinal contest, Australia’s Samantha Stosur beat Belgian Kirsten Flipkens 6-3 4-6 6-3 to complete the final four slate for Friday. After splitting the first two sets with singles breaks, the 2011 U.S. Open champion broke Flipkens twice in the final set to clinch the one hour and 36 minute late evening match.

A former Champion went down on Stadium Court, as Giorgi knocked-off Wozniacki 6-4, 6-2 in the Round of 16. The Italian used her strong serve and aggressive ground strokes to drop the Dane, moving on to the quarterfinals in New Haven.

Wozniacki, the four-seed and World No. 11, came into today’s match-up boasting a 25-2 overall record in New Haven, but Giorgi has been known to pull such theatrics before. Beating the world’s elite is nothing new for the hard-hitting Italian, securing wins over Maria Sharapova, Victoria Azarenka, Dominika Cibulkova and Andrea Petkovic in 2014. She upset Wozniacki at the US Open a year ago before the Dane avenged that loss in Birmingham in June.

Sam Stosur jumped out to a fast start on third seed Genie Bouchard and never let up, defeating the 20-year-old Canadian 6-2, 6-2 to reach the quarterfinals. The 2011 US Open Champion moves on to face Kirsten Flipkens in the quarterfinals. After splitting the first two sets, Garbine Muguruza bested Peng Shuai in the third to win 6-2, 3-6, 6-3. Muguruza, the World No. 26, will face Giorgi in a quarterfinal tilt.

Kirsten Flipkens outlasted Andrea Petkovic in a match that lasted over three hours, defeating the German 4-6, 7-6(4) 7-6(6) on Stadium Court.

Barbora Strycova bounced lucky loser Caroline Garcia of France 7-5, 6-2, moving on to the quarterfinals. The 28-year-old Czech player will face the winner of Ekaterina Makarova and the 2012 winner here, Petra Kvitova, the reigning Wimbledon champion.

Petra Kvitova, the 2012 Connecticut Open Champion, pounced on Ekaterina Makarova early and never let up, defeating the Russian 6-2, 6-1 in 49 minutes. The Czech looked strong in her opening match, playing lights-out tennis en route to the victory. The Wimbledon Champion will face Barbora Zahlavova-Strycova in the quarterfinals.

A champion here a year ago, world No. 2 and top seed Smona Halep was shocked in her first match of the 2014 Connecticut Open presented by United Technologies, beaten by Magdalena Rybarikova on Stadium Court, 6-2, 4-6, 6-3. Rybarikova, the world No. 68, advances to the quarterfinals where she will face American upstart Riske, a winner earlier on Tuesday.

ctopen.org: August 18 2014 New Haven, CT - Four-time Champion Wozniacki started slow, but the Dane won 12 of the last 15 games to defeat Timea Bacsinszky 4-6, 6-1, 6-2 in the opening round. Wozniacki moves on to face hard-hitting Italian Camila Giorgi in the second round.

Third-seed Genie Bouchard made quick work of Bojana Jovanovski in the first round of the 2014 Connecticut Open, dispatching the Serb 6-1, 6-1 in 52 minutes. The 20-year-old Canadian got off to a fast start, bolting to a 5-0 in the first set and never looked back. She then proceeded to blast four aces in the deciding set to move into the next round where she will face Sam Stosur.

Andrea Petkovic bettered Dominika Cibulkova 7-6(2), 6-3 to advance to the second round at the Connecticut Open. Petkovic, the World No. 19, moves on to face fellow Wildcard Kirsten Flipkens. Samantha Stosur was able to pull away in the third to defeat Kurumi Nara 7-6(5), 6-7(10), 6-2. Nara gave the 2011 US Open Champion all she could handle, surviving a marathon second set to push a third, but the Australian was too much to handle in the final frame.

Wildcard Kirsten Flipkens is sticking around after a 6-3, 4-6, 6-2 win over Misaki Doi. The Belgian awaits the winner of Cibulkova-Petkovic, who take to Stadium Court following Wozniacki-Bacsinszky. Young Swiss Belinda Bencic made quite the run through the qualifying draw, but her streak was ended at the hands of Zahlavova-Strycova, 6-4, 5-7, 6-3 on Monday afternoon. Bencic did not go away easily, pushing the Czech to three sets, but Strycova pulled away in the third set for the win.

World No. 26 Garbine Muguruza upset Sara Errani, 6-2, 3-6, 6-1. The Spaniard pounced early on the seventh-seeded Italian, but Errani evened the odds in the second set. However, Muguruza was too much in the third, defeating the World No. 14 6-1 in the decisive frame and moves on to face Shaui Peng in the second round.

Peng picked up right where she left off in the qualifying draw, as the World No. 40 scored another impressive win in New Haven. Peng, one of the top doubles players in the world, defeated Elena Svitolina 6-4, 6-3 on Stadium Court.

ctopen.org: August 17 2014 New Haven, CT - American Alison Riske advanced to the Round of 16 at the Connecticut Open presented by United Technologies for the second straight year, dispatching Australian Casey Dellacqua, 6-1, 6-4, on Sunday. Riske broke through as a qualifier last year, but 2014 has been a different story. The Pittsburgh native has played phenomenal tennis of late, reaching a career-high ranking earlier this summer.

Camila Giorgi packs a lot of power in her ground strokes, and her game was on full display in an impressive 6-3, 6-1 win over American Coco Vandeweghe. The Italian won an impressive 68 percent of her service points en route to victory, setting up a potential date with four-time Champion Caroline Wozniacki in the second round.

Ekaterina Makarova has been on top of her game in recent months, and she provided more of the same today against Roberta Vinci, defeating the Italian 6-3, 6-3 on Stadium Court. Makarova has advanced to at least the quarterfinals at four of her last five tournaments (including a tournament known as Wimbledon… ), and the World No. 18 is now one win away from extending her run.

Sixth-seeded Flavia Pennetta got off to a fast start and never looked back, taking down Klara Koukalova 6-1, 6-3 in the final match on Stadium 1. The Italian’s serve was on target throughout, sticking five aces and winning over 70 percent of her service points. The World No. 14 moves on to face American Alison Riske in the second round. 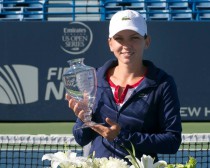 newhavenopen.com: August 24, 2013 by Nicholas McCarvel - Unseeded Simona Halep completed her shock run through the New Haven Open at Yale Saturday afternoon with a decisive 6-2, 6-2 win over defending champion Petra Kvitova. Halep, the world No. 23, had beaten Daniela Hantuchova, Carla Suarez Navarro, Ekaterina Makarova and Caroline Wozniacki en route to the final, dropping just one set in five matches. It's a fourth title this year for Halep, who has run up a record of 29-5 over the last three months, including her semifinal run at Rome and three other titles. New Haven now makes it four titles to her name - all of them coming in the last few months.