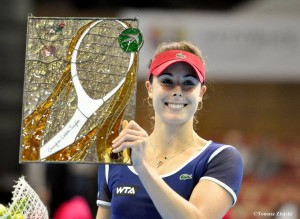 wtatennis.com: April 13 2014 Katowice, Poland - - Alizé Cornet showed off her fighting spirit to win an absolute marathon of a final at the BNP Paribas Katowice Open on Sunday, coming away with the fourth WTA title of her career.

Giorgi showed off some fighting spirit too, though. Playing in the first WTA final of her career, the Italian dropped a lengthy 69-minute first set in a tie-break and faced some pretty daunting deficits in the second set - 3-0 then later 5-3, and even two points from losing in that game - but she won four games in a row to push the match to a third set, keeping her hopes of a maiden WTA title very alive.

Cornet was the frontrunner once again for most of that third set, winning the first three games for a 3-0 lead, but an inspired Giorgi came charging back again, winning five of the next six games to go up 5-4 - she even got herself to match point in that game, with Cornet stepping up to serve at 30-40.

But a missed backhand return brought it back to deuce, and from there it was all Cornet - the No.4-seeded Frenchwoman held, broke then held at love to end it, 76(3) 57 75, and then fell to the ground. At three hours and 11 minutes it was the fifth-longest match of the year. The longest match of the year so far was Maria Sharapova's three-hour, 28-minute victory over Karin Knapp at the Australian Open.

Cornet also becomes just the second player this year to save match point en route to a WTA title, after Li Na, who saved a match point against Lucie Safarova en route to winning the Australian Open. 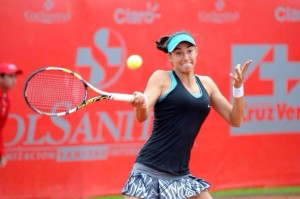 wtatennis.com: April 13 2014 Bogota, Colombia - Caroline Garcia completed a dream run at the Claro Open Colsanitas on Sunday, not only getting her first Top 10 win over Jelena Jankovic, but winning her maiden WTA title.

Jankovic, the No.1 seed and defending champion, broke in the first game of the match, but from there the No.5-seeded Garcia took over, breaking right back and never falling behind again, taking six of the next eight games to take the first set then breaking early in the second set en route to a 3-1 lead. Jankovic caught up to 3-all but Garcia broke again and eventually served out the match, firing back-to-back aces to bring up match point then hitting a phenomenal forehand winner to shut the door, 63 64. 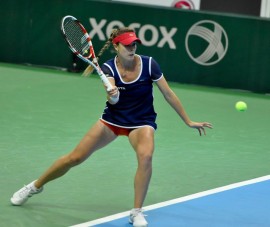 wtatennis.com: April 9 2014 Katowice, Poland - Alizé Cornet dug herself out of some pretty hefty holes to stun Agnieszka Radwanska in the semifinals of the BNP Paribas Katowice Open. Camila Giorgi awaits in the final. Radwanska had beaten Cornet in straight sets in all three of their previous meetings, and things looked headed the same way this time as she raced through the first set at love - not even facing game point in any of those six games - and, after losing the second set, jumping out to a 3-0 lead in the third.

The No.1-seeded Radwanska even had a point for a 4-0 in the decider but the No.4-seeded Cornet never stopped grinding, winning six of the last seven games of the match to scrape it out, 06 62 64. Cornet's breakthrough year against top players continues - going into Dubai two months ago she was a dubious 0-17 lifetime against Top 4 players but finally got on the board there with a semifinal win over World No.1 Serena Williams. The Frenchwoman now has a second Top 4 win over the World No.3.

She's also through to her eighth WTA final now, going 3-4 in her first seven - her three WTA titles all came at the International level, at Budapest in 2008, Bad Gastein in 2012 and Strasbourg in 2013. Awaiting her will be Giorgi, who kept her dream week going with a 76(2) 64 upset over No.3 seed Carla Suárez Navarro. The two put on a serving display in the first set - no breaks, not even any break points. But Giorgi opened up a 3-1 lead in the second set and the two kept holding serve until Giorgi won.

What a match. #CamilaGiorgi wins the first set in a tie-break 7-6 (7-2) and leads 3-1 in the second set pic.twitter.com/ZJUuBFDvph 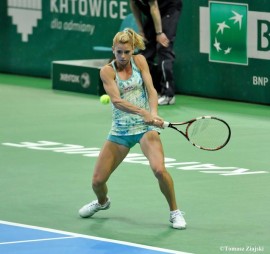 wtatennis.com: April 9 2014 Katowice, Poland -  - Agnieszka Radwanska battled past veteran Yvonne Meusburger in the BNP Paribas Katowice Open quarterfinals, but there was another veteran who made it a very special win.

The early goings were scratchy - Radwanska went up 2-0, but then Meusburger broke back to catch up to 2-all, and they traded breaks again to get to 3-all. But it was there that the No.1-seeded Radwanska started to pile it on, winning eight of the next nine games to build a 64 50 lead; she got broken while serving for the match but broke the No.6-seeded Meusburger one last time to close it out, 64 61.

Awaiting Radwanska in the semifinals is No.4-seeded Alizé Cornet, who won a surprisingly streaky match against No.5-seeded Klara Koukalova earlier in the day, 62 06 62. After cruising through the first set, Cornet was overpowered in a lopsided 29-minute second set - but she regrouped to win in three.

Radwanska has beaten Cornet in straight sets in all three of their previous meetings, but they've all been close - including their last one just a matter of weeks ago in the fourth round of Indian Wells. In another quarter-final match, Italy's Camilla Giorgi booked herself a semi-final slot on Friday after cruising past Shahar Peer of Israel 6-4 6-1. 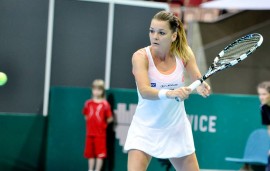 Though she is currently ranked down in the 40s, Schiavone is always a tough customer - 2010 French Open champion, former World No.4, six career wins over Top 3 players. And her mix of offense, defense and spins has given Radwanska a lot of problems too, as she won their first four meetings.

And all of that looked like it was coming into play early on in the pair's second round clash in Katowice, as Schiavone built a 4-2 lead in the opening set. But Radwanska shifted gears at the most critical of times, winning seven of the next eight games to go up 64 31, and after a string of holds the No.1-seeded Pole broke one last time to seal a one-hour, 44-minute, 64 63 triumph over the Italian.

In another second round match, France's No.4 seed Alize Cornet defeated Kristina Kucova of Slovakia 6-3 4-6 6-3 to advance against Klara Koukalova in the quareter-finals on Friday.

Alize Cornet defeats Kucova 6-3,4-6,6-3 to secure a place in the QFs of #BNPKatowiceOpen pic.twitter.com/2DLziYw6jc 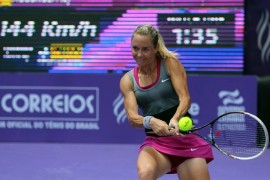 wtatennis.com: April 9 2014 Katowice, Poland - Klara Koukalova became the third player to reach 20 WTA-level match wins on the year at the BNP Paribas Katowice Open, joining Li Na and Dominika Cibulkova in the elite club. The No.5-seeded Koukalova rallied from a set and a break down to beat Annika Beck in a few minutes shy of two hours, 46 63 61. From 1-0 down in the third she won six games in a row to close it out.

Koukalova is now the third player so far this year to reach 20 WTA-level match wins, after Li (who has 21) and Cibulkova (who has 20). Agnieszka Radwanska will try to reach 20 herself on Thursday. There was only one more second round match in the day session and it saw Shahar Peer upset No.8 seed Tsvetana Pironkova, 62 61. It was an upset on paper but not if you look at the head-to-head - Peer had won four of the pair's last five meetings, including in the first round in Katowice last year.

The other daytime matches were both first rounds, with No.7 seed Magdalena Rybarikova beating French qualifier Claire Feuerstein, 62 75, and Mirjana Lucic-Baroni beating Jovana Jaksic, 63 64. Jaksic was coming off a breakthrough week, reaching the first WTA final of her career in Monterrey. Full article

There is no upset. #SuarezNavarro edges through to the QFs of #BNPkatowiceOpen. She beats #Cadantu 2-6,6-4,6-4 pic.twitter.com/nt0qbtWRDU

wtatennis.com April 8 2014 Katowice, Poland - Agnieszka Radwanska made a winning return to Poland on Tuesday, winning her opening match against one of the WTA's other sister acts - Kristyna Pliskova - in straight sets. The No.1-seeded Radwanska held all nine of her service games and broke Pliskova's serve three times - including twice at love - to roll past the Czech wildcard in an hour and nine minutes, 63 62.

Radwanska's serve was particularly strong - she hit five aces, including three in a row at one point. "It's always hard to play against a lefty big-server like Kristyna, who is very talented and never gives you too much rhythm," Radwanska said. "I had to play very well today to win this match." This is the third time Radwanska is playing a WTA event in Poland. The first two times came at Warsaw in 2006 and 2007 - when she played there in 2006 it was actually her first WTA main draw. Full article﻿