Svitolina came out far stronger, cruising to a 6-1 first set in just 22 minutes. But things got much tougher in the second set as Jovanovski wouldn't budge on her serve - in fact neither played budged on their serve, 12 straight holds leading the hard-hitting WTA Rising Stars into a second set tie-break.

The No.2-seeded Svitolina jumped out to a 4-0 lead in that second set tie-break and never really looked back, eventually closing the No.5-seeded Jovanovski out on her first match point, 6-1, 7-6(2).

"I think we were both nervous at the start of the match, but I handled it really well," Svitolina said. "In the second set she was trying to fight, and she's not the type of person who gives up - I've watched her fighting for every ball and for every set before and I was actually expecting this fightback.

"But I was playing really well here and I'm happy I could defend my title. I'm really happy with the way I'm playing and I'm enjoying myself - I'm feeling really confident with my game right now."

"In the first set I couldn't find any rhythm," Jovanovski said. "In the second set I tried to come back and it was a little bit better, but it still wasn't enough to win the set. I had a few chances to break but didn't use my opportunities. But she played really well today and definitely deserved to win."

Ranked No.422 at the start of the week, 18-year-old Fangzhou was the final player to gain direct entrance into the draw at the WTA 125K Series event. And she has certainly not looked out of place, seeing off a string of higher-ranked opponents to reach the final, dropping just one set along the way.

And for a period at the start for the third set against Peng, it looked like she would be leaving with the silverware. Having hit back to take the second set after losing a one-sided opener, she brought up two break points in the first game of the decider with a brilliant down-the-line backhand.

Peng snuffed out the danger with two aces, before surviving a third when Fangzhou's forehand pass sailed a fraction wide. It was tit for tat for the next few games until 4-3 when Peng summoned her best tennis of the match.

A couple of brilliant defensive points from Peng piled the pressure and her teenage opponent wilted, handing over the break when a slashing forehand missed its mark.There was to be no fairytale comeback, and a few moments later Peng completed a 6-2, 3-6, 6-3 victory when Fangzhou sent another forehand long. 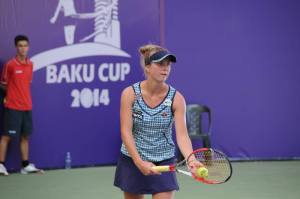 wtatennis.com July 26 2014 Baku, Azerbaijan - Elina Svitolina and Bojana Jovanovski both were victorious in tight three-setters on Saturday to set up a Baku Cup final featuring the two WTA Rising Stars, who are the past two winners of this tournament.

The second-seeded Svitolina converted on five of six break points and saved eight of 11 on her own serve in her 3-6, 6-1, 6-4 defeat of Francesca Schiavone. The third set was a see-saw affair, with Svitolina getting out to a 3-1 lead, Schiavone winning four straight games to go up 4-3 and Svitolina winning three straight to close out her triumph.

Though she dropped a set for the first time all week on Saturday, Svitolina improved to 9-1 here. She will be competing in her second WTA final, having won her first here last year.

The fifth-seeded Jovanovski was victorious in three sets for the third time this week, rallying from a 4-1 third set deficit in her 3-6, 6-1, 6-4 win over Stefanie Voegele.

In Nanchang, China, No.1 seed Peng Shuai will play fellow Chinese Liu Fangzhou for the inaugural Zhonghong Jiangxi International Women's Open title. In a three-hour-and-22-minute marathon semifinal on Saturday, Peng was a 6-4, 6-7(6), 6-3 victor over countrywoman Zheng Saisai. It looked like it would be a routine win for Peng when she went up a set and 5-2. But Zheng rallied and eventually forced a tie-break, in which she fought off two match points as Peng surrendered her first set all week.

Peng shook off that disappointment, though, and broke serve three times in the third set - eventually closing it out on her sixth match point. The 18-year-old Liu had a much easier time of it, as after getting in an early 3-1 hole against fourth-seeded Luksika Kumkhum, she dropped just two more games the rest of the way for a 6-4, 6-1 triumph. 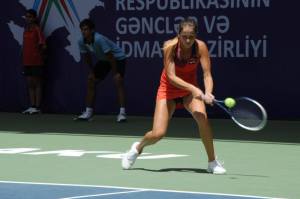 Since turning professional in 2007, Eguchi has plied her trade exclusively on the ITF Circuit, but she has certainly not looked out of place on her WTA main draw debut. Victories over Magdalena Rybarikova and Urszula Radwanska had secured her a spot in the quarterfinals, and for the first hour against 2012 champion Jovanovski it looked like her improbable run was set to continue.

Meeting Jovanovski for a place in the final will be Stefanie Voegele, who held her nerve to see off Shahar Peer. In a match short on service holds but high on drama, Voegele built an early lead in the decider, withstanding some late pressure to triumph, 6-2, 2-6, 6-4.

wtatennis.com July 24 2014 Baku, Azerbaijan - Top seed Sorana Cirstea became the Baku Cup's  latest big name casualty when she was bundled out by Stefanie Voegele in the second round on Thursday.

Voegele did not make the ideal start, dropping serve in the opening game, but from then on she was almost flawless, taking the next six games without reply. At the start of the second set, Voegele afforded Cirstea a brief respite in the shape of a comfortable hold, before completing her 6-1, 6-1 triumph with another run of six straight games.

Cirstea is the sixth seed to fall this week, and leaves WTA Rising Star Elina Svitolina as the highest-ranked player left in the draw. Svitolina, who picked up the title 12 months ago, overcame Sílvia Soler-Espinosa, 7-5, 6-2, to extend her winning run in Baku to seven matches.

Also securing a quarterfinal berth was Kristina Mladenovic, who recovered from a stuttering start to emerge victorious from her battle with fellow WTA Rising Star Donna Vekic, 2-6, 6-3, 6-0. Meeting her next will be former French Open champion Francesca Schiavone, after she saw off the challenge of Julia Glushko, 6-2, 7-6(2).

wtatennis.com: July 23 2014 Baku, Azerbaijan – Former champion Bojana Jovanovski booked her place in the quarterfinals of the Baku Cup with a straight set 6-3 6-1 win over Katarzyna Piter on Wednesday.

An inauspicious start saw Jovanovski lose eight of the first nine points to fall an early break behind. But she soon snapped out of this slumber, five games on the trot getting her back on track and on the way to the opening set. The No.5 seed continued this dominance in the second, breaking twice more to close out the match.

Meeting her next will be the week's surprise package, Misa Eguchi, who defeated Urszula Radwanska, 6-2, 6-1. Also advancing were last year's runner-up, Shahar Peer, and Pauline Parmentier. Peer recovered from losing six straight games in the first set to defeat Vesna Dolonc, 3-6, 6-2, 6-2, while Parmentier edged out No.8 seed Jana Cepelova, 7-6(2), 6-4.

In Nanchang, China, Wang Qiang was Wednesday's sole winner at the Zhonghong Jiangxi International Women's Open as the weather played havoc with the schedule. Heavy rain saw most of the matches cancelled or forced indoors, with Wang's 6-1, 7-6(2) second round victory over Noppawan Lertcheewakarn the only one to be completed outside. 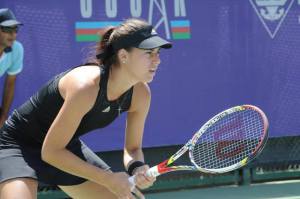 wtatennis.com: July 22 2014 Baku, Azerbaijan - Top seed Sorana Cirstea delivered a confident performance on her Baku Cup debut, easing past wildcard Ons Jabeur in straight sets. A shoulder injury has restricted Cirstea to just one match in the past two months, but there were few signs of rustiness during her 6-3, 6-3 win over Jabeur on Tuesday.

Also into the second round was WTA Rising Star Elina Svitolina, who began the defense of her title with a 6-2, 6-4 victory over qualifier Nigina Abduraimova. No.2 seed Svitolina broke four times on her way to the first set and despite some spirited late resistance from Abduraimova, she eventually wrapped up victory on her seventh match point.

Since reaching the semifinals in 's-Hertogenbosch, Magdalena Rybarikova has failed to win a match and a 6-4, 7-6(7) defeat to qualifier Misa Eguchi extended this streak. The No.3 seed had her chances - she was 3-0 up in the second set and held a set point in the tie-break - but Eguchi held her nerve to win her first WTA main draw match. No.4 seed Kurumi Nara lost to former French Open champion Francesca Schiavone, 6-2, 6-2, while Kristina Mladenovic won a topsy-turvy encounter with Heather Watson, the No.7 seed, 6-2, 3-6, 6-0.