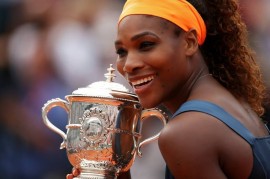 wtatennis.com: November 22, 2013 Palm Beach Gardens, Florida - Was there really any doubt? She didn't just put together the best season of anyone in 2013, she put together one of the very best seasons in the history of women's tennis - and so, for the fifth time, Serena Williams is the WTA's Player Of The Year.

Of all of her accomplishments in 2013, Williams pointed to one in particular as a stand-out memory.

"Well, obviously the French Open was probably the thing that stands out most," she said. "I really wanted to win that for a number of years now, so that was definitely something exciting. And also being undefeated on clay was pretty exciting too. So my results on clay this year definitely stand out.

"Overall I'll remember the wins, but I also want to learn from my mistakes so I don't repeat them."

Not only do Williams' numbers tell the story of an historic season, but they put her in a position to make even more history in 2014 - by winning the French and US Opens this year she pushed her career haul of Grand Slams to 17, one away from Chris Evert and Martina Navratilova, who both won 18, which ties them for second place in the Open Era. Steffi Graf is the Open Era leader with 22 Grand Slam titles. Read full article

WTA's "Doubles Team of the Year" Errani and Vinci 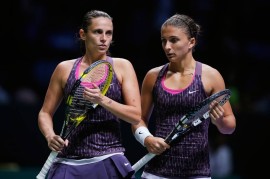 In a year where the four Grand Slam doubles titles were all won by different teams, it was always going to be hard to pick this one - but for their Australian Open title, being so consistent all year, and most importantly never letting anyone else have a piece of World No.1, Sara Errani and Roberta Vinci are very deservedly the WTA's Doubles Team Of The Year.

Best friends and fantastic in singles and doubles, Errani and Vinci make the perfect team. And before 2013 even started they had a lot to brag about - 13 WTA doubles titles together, including their first two Grand Slams at the French and US Opens last year, and both had also spent time individually at No.1.

But there was something missing, something so many of the all-time greatest teams have had together - the co-World No.1 doubles ranking. And it finally became reality for Errani and Vinci on April 29, 2013, as Errani joined Vinci at the top spot - it was after a breakthrough first few months of the year as well, where they won three WTA doubles titles, including their third Grand Slam title at the Australian Open.

They haven't won a title since becoming co-No.1s, but they have maintained very consistent results, highlighted by two more finals (at Rome and Roland Garros) and two more semifinals (at Beijing and the TEB BNP Paribas WTA Championships in Istanbul, qualifying there for the second year in a row).

Errani and Vinci aren't just doubles specialists, either - they are both ranked in the Top 15 in singles too, Errani at No.7 and Vinci at No.14, in fact the only two players in the Top 15 of both singles and doubles. Only one other player is in the Top 20 of both disciplines - that would be Jelena Jankovic. Full article

WTA 'Shot of the Year' Finalists