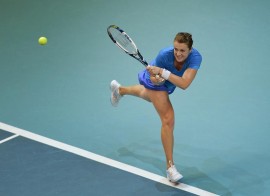 wtatennis.com February 2 2014 Paris, France - Anastasia Pavlyuchenkova tamed her game when it mattered most and outdid Sara Errani in three sets in the final of the Open GDF SUEZ. It was the biggest title of her young career.

The championship match was a clear contrast of styles. Pavlyuchenkova the aggressor, ripping her big serves and groundstrokes; the No.3-seeded Errani was the crafty counterpuncher, not just tirelessly running everything down but using angles, spins and volleys to off-set her opponent's rhythm.

It couldn't have been streakier. Pavlyuchenkova came out firing, building a 3-1 lead in the first set, but Errani reeled off the next seven games to build a 63 20 lead, even holding a point for 63 30. Pavlyuchenkova struck back with seven games of her own to take the second set and move ahead 1-0 in the third, but Errani retaliated with three straight games to build a 3-1 lead in that decider.

One last swing sealed it though. Her huge groundstrokes on fire again, Pavlyuchenkova ran off five games in a row - dropping just six points in the process - to run away with the match, 36 62 63. The Russian crushed an inside out forehand winner on match point, her 48th winner of the day. 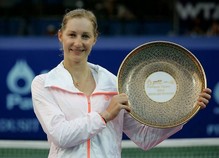 In Thailand, Ekaterina Makarova won her second WTA title at the PTT Pattaya Open, following a string of three-setters with a straight set win against Karolina Pliskova in the final.

Having been pushed to three sets in three of her previous four rounds - including battling back from 2-0 down in the third set to beat Kimiko Date-Krumm in the quarterfinals - the No.4-seeded Makarova showed some steely nerves not to let Pliskova push her the distance too, fighting off two set points in the second set tie-break to edge the Czech in about as tight a two-setter as possible, 63 76(7). 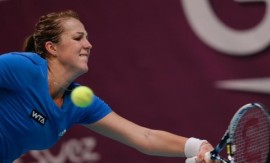 wtatennis.com February 1 2014 Paris, France - Anastasia Pavlyuchenkova pulled off the third and biggest upset of her Open GDF SUEZ campaign, outslugging Maria Sharapova in the semifinals of the Premier-level event. Pavlyuchenkova, who had taken out No.7 seed Carla Suárez Navarro and No.4 seed Angelique Kerber in the last two rounds, rallied from a set down and an early break in the third to beat the No.1-seeded Sharapova, 46 63 64. Sharapova hit back-to-back double faults on the last two points of the match.

Sara Errani battled over three hours to beat Alizé Cornet in the other semifinal match reaching her second straight final at the Premier-level tournament. Errani had won the pair's last three meetings in straight sets but there was something very different about this meeting, as Cornet - France's No.1 player now after Marion Bartoli's retirement - was particularly sharp, barely losing a 69-minute first set, winning three easy games to run away with the second set and battling back from 5-3 down to push the deciding set to a decisive tie-break. Cornet's fighting spirit never waned as she again rallied from 5-3 down in the breaker to even it up at 5-all, but the No.3-seeded Errani snuck out two quick points to shut the door, 76(3) 36 76(5).

At the Pattaya Open in Thailand, No.4 seed Ekaterina Makarova defeated Andrea Hlavackova over three topsy-turvy sets at the PTT Pattaya Open on Saturday to move within touching distance of a second career title against another unseeded opponent, Karolina Pliskova. Just as in her quarterfinal with Kimiko Date-Krumm 24 hours earlier, Makarova came flying out of the traps against Hlavackova only to lose her way. A break in the second game proved enough for the Russian to take the opening set, but she was unable to build on this momentum as Hlavackova reeled off six unanswered games to level the match up. Makarova halted the Czech's charge at the start of the decider with a break to move 2-1 and hung onto this slender advantage to close out the match, 63 06 64.

Earlier in the day, Pliskova overcame Julia Goerges in a serve-dominated encounter. The players hit a combined total of 29 aces, but in the end it was a double fault from Goerges midway through the third set that proved the difference. That mistake helped Pliskova open up a 4-2 lead and a few games later she served out to love for a 63 46 63 victory. 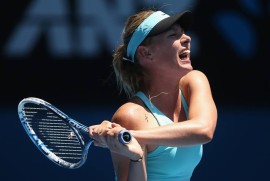 wtatennis.com: January 31 2014 Paris, France –  Two of the hardest hitters out there will meet in the semifinals of the Open GDF SUEZ, after Maria Sharapova and Anastasia Pavlyuchenkova won two very different quarterfinals.

Pavlyuchenkova was the first to advance, coming within points of winning the first set but losing it, but then grinding for almost two and a half hours to beat No.4 seed Angelique Kerber, 57 63 76(3).

She'll have to bring her best out again in the next round as she faces the No.1 seed, Maria Sharapova, who swatted aside the challenge of No.8 seed Kirsten Flipkens in just 69 minutes, 62 62.

Sharapova beat Pavlyuchenkova in their only previous meeting, but it was a three set thriller in the semifinals of Cincinnati in 2010, with Sharapova originally leading by a set and a break, dropping the second set, then reeling off four games in a row from 2-all in the third set to close it out. 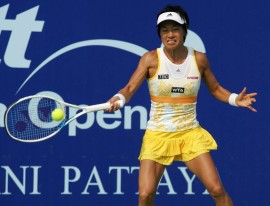 wtatennis.com January 30, 2014 Pattaya City, Thailand - Kimiko Date-Krumm made her first quarterfinal of the season by beating a player 20 years her junior on Thursday at the PTT Pattaya Open.

The 43-year old Date-Krumm, who fought off two match points in an almost three-hour first round defeat of Garbiñe Muguruza on Tuesday, overcame a 5-3 first set deficit in her 76(4) 63 triumph, setting up a clash in Friday's quarterfinals with fourth-seeded Ekaterina Makarova and making her the oldest quarterfinalist in the draw by 15 years.

Also escaping an early hole was Makarova's usual doubles partner, No.5 seed Elena Vesnina. Down 3-1 to Nicha Lertpitaksincha, the Russian reeled off five straight games en route to a 63 63 victory. Next up for her is Julia Goerges, whom she is 3-0 against. Eighth-seeded Chinese Peng Shuai made comebacks in both sets versus Alexandra Dulgheru. She was down 3-1 in the first set and 4-1 in the second but emerged with a 63 64 win.

In Paris Open, eighth-seeded Belgian Kirsten Flipkens cruised past beat Yvonne Meusburger of Austria 6-1, 6-3 at the Open GDF Suez on Thursday to set up a quarterfinal clash with No.1 seed Maria Sharapova. Last year's finalist third seed also advanced to the last eight with a straight sets victory over Karin Knapp 6-4 6-3 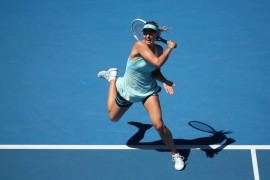 Sharapova back to winning ways in Paris Open. Photo australianopen.com

wtatennis.com: January 29 2014 Paris, France - Maria Sharapova put her fourth round loss at the Australian Open behind her in a big way on Wednesday, dropping just one game to Daniela Hantuchova in her Open GDF SUEZ opener. The last time they played, Sharapova barely scraped by Hantuchova at Stanford three years ago, rallying from 2-0 down in the third to win. This time was the total opposite as the No.1-seeded Sharapova won the first eight games of the match and barely looked back for a 60 61 victory.

In other matches on Wednesday, No.5 Simona Halep, Australian Open quarter-finalist, and No.6 Roberta Vinci were both upset in their opening rounds falling to recent Australian Open Mixed Doubles champion (w.D.Nestor) Kristina Mladenovic of France 7-6(3) 6-4 and Ukraine’s Elina Svitolina 6-3 0-6 7-5 respectively. Official Site

In Pattaya, Thailand, No.4 seed Ekaterina Makarova was among three players booking quarterfinal berths at the PTT Pattaya Open on Wednesday. Ekaterina Makarova converted on five of six break point opportunities en route to a 60 62 win over fellow Russian Vera Zvonareva, who returned to WTA action earlier this month after an illness and shoulder injury kept her sidelined since the 2012 Olympics.

Also victorious in second round play was Sorana Cirstea. The third-seeded Romanian converted on all four of her break chances in her 63 64 defeat of Alison Riske to reach her first WTA quarterfinal since Toronto last August. Next up for Cirstea is Karolina Pliskova, who rallied from 3-0 down in the third set for a 46 63 64 triumph over Russian qualifier Alla Kudryavtseva. Official Site 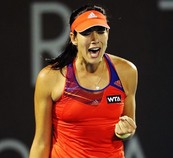 wtatennis.com: January 28 2014 Pattaya City, Thailand - Former World No.2 and two-time Grand Slam runner-up Vera Zvonareva recorded her first win in a year and a half on an undefeated day for Russians in the first round of the PTT Pattaya Open on Tuesday.

Zvonareva did not play after the Olympics in 2012 and not at all in 2013 as she dealt with illness and a right shoulder injury that required surgery. 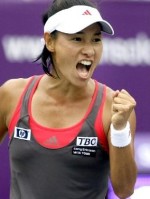 It would seem fitting that Zvonareva would get back on the winning track in Pattaya City, where she was triumphant in 2009 and 2010. And she did just that in beating Thai wildcard Peangtarn Plipuech, 63 62, to improve to 18-4 here.

Kimiko Date-Krumm fought off two match points in her 67(2) 75 76(6) upset win over sixth-seeded Garbiñe Muguruza in their opening round action on Tuesday. Muguruza won her maiden WTA Tour title in Hobart three weeks ago. Date-Krumm, age 43, turned back the clock and admirably out-lasted her 19-year old opponent in two hours and 50 minutes.