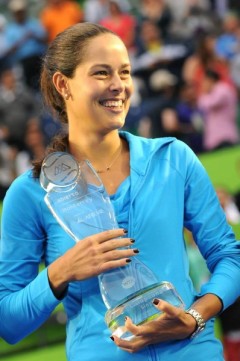 wtatennis.com April 7, 2014 Monterrey, Mexico  - Ana Ivanovic overpowered Jovana Jaksic in an all-Serbian final at the Abierto Monterrey on Sunday night, winning her second WTA title of the year - and 13th of her career.

After a string of battles, including a few three-setters and a tight two-setter against fellow former No.1 Caroline Wozniacki in the semifinals, Ana Ivanovic came into the Abierto Monterrey final with perhaps the toughest challenge of them all - a match with good friend and fellow Serb Jovana Jaksic. And the early goings didn't go so well - Ivanovic lost the first six points of the match, including dropping serve at love in the opening game.

But the No.2-seeded Ivanovic regrouped quickly, winning 16 of the next 17 points and eventually putting her unseeded countrywoman away in 60 minutes, 62 61. Having also won in Auckland in the first week of the year, Ivanovic is now the third player this season to win multiple WTA titles, alongside Top 2 players Serena Williams and Li Na. Additionally, it's the first time the 2008 French Open champion has captured multiple WTA titles in a season since 2010. Full article 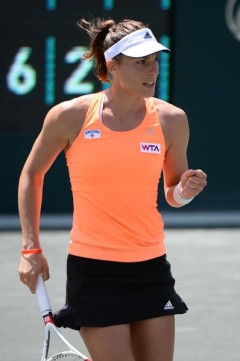 wtatennis.com: April 6 2014 Charleston, SC, USA Years of injuries may have held her back, but they haven't kept her down, not one bit - former World No.9 Andrea Petkovic came full circle at the Family Circle Cup this year, putting all of those struggles behind her to capture the third and biggest WTA title of her career.

After a string of surprises throughout the week, the No.14-seeded Petkovic took on unseeded Jana Cepelova, conqueror of Serena Williams, in the final. The early goings were tough, and serving at 4-5, 30-40, Petkovic faced set point - but she dug out of that one and stormed through eight games in a row to build a 75 50 lead, and a few games later she finally closed her greatest triumph out, 75 62.

Since breaking into the Top 10 in 2011, it has been a rough few years for Petkovic - back and ankle injuries pretty much ruined her 2012 season, and a knee injury kept her out for the first chunk of the 2013 season. She nearly fell out of the Top 200 at one point, falling as low as No.192 the week of October 8, 2012, and just over a year ago she went into the Miami fortnight down at No.177.

But some very encouraging results last summer - most notably finals in Nürnberg and Washington DC - proved Petkovic wasn't done yet. She came into Charleston this week ranked No.40 in the world, and now, after six grueling rounds, her first Premier-level title - her other two came at Internationals. Full article 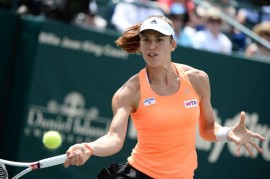 wtatennis.com: April 5 2014 Charleston, SC, USA – Andrea Petkovic clawed back to beat Eugenie Bouchard in a semifinal thriller at the Family Circle Cup, now a win away from the third - and biggest - WTA title of her career.

Both players had pulled off big wins en route to the semis - Petkovic over higher seeds Sabine Lisicki and Lucie Safarova, Bouchard over former Family Circle Cup champions Venus Williams and Jelena Jankovic - and with both playing so well to get there, it was a match-up everyone had their eye on.

With some rock solid play from the baseline and big returning, the No.6-seeded Bouchard dominated for most of the match - she won the first set in just 29 minutes, 6-1, and at 3-2 in the second set had three break points to go up 4-2. And even after letting the second set slip away the young Canadian went right to the grind again, building a 4-2 lead in the third, even holding a point to go ahead 5-2. The No.14-seeded Petkovic hung on every time though, her deep, flat groundstrokes never breaking down, and with a barrage of her own big returns she broke one last time to close it out, 16 63 75.

Awaiting Petkovic in the final is Jana Cepelova, who squeaked by Swiss qualifier Belinda Bencic in a battle between first-time WTA semifinalists, 64 57 76(7). Cepelova came from a break down in the third set and, after missing her first match point up 5-4, got it on her fourth match point in the breaker. 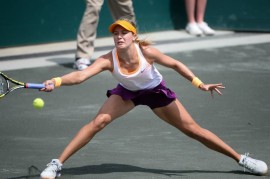 wtatennis.com: April 4, 2014 Charleston, SC - Eugenie Bouchard battled past Jelena Jankovic on Friday to not only reach the semifinals of the Family Circle Cup, but also to record the biggest win of her blossoming career.

In a match-up between two of the best movers in the game, Bouchard and Jankovic were grinding it out for more than two hours in front of a packed center court crowd, putting on a dazzling display of long rallies and some particularly impressive returning from Bouchard and down-the-lines from Jankovic.

Bouchard looked headed for a straight set victory as she took the first set and broke for 4-3 in the second set - Jankovic tightened the screws from there to win four games in a row, pushing the match to a third set, but the No.6-seeded Canadian regrouped, closing out the No.2-seeded Serb, 63 46 63.

Swiss qualifier Belinda Bencic continued to take the Family Circle Cup by storm on Friday, upsetting No.3 seed Sara Errani to reach the first WTA semifinal of her young career. For the first half of the match it looked as though experience would prevail, as Errani's backboard-like game built her a 64 22 lead - but Bencic took complete control of the match from there, reeling off nine straight games to win the second set and go up 5-0 in the third. She would close it out, 46 62 61.

Next up for Bencic is another surprise package - Jana Cepelova, who had already taken out No.1 seed Serena Williams and No.13 seed Elena Vesnina earlier in the tournament, dropped a 62 61 decision on No.12 seed and fellow Slovak Daniela Hantuchova in the feature night match on center court.

Some evening session (and then some) photos after an active and exciting #FCC2014 Friday: http://t.co/1kzrvUbiff pic.twitter.com/PL0VcEEq1T

wtatennis.com: April 3 2014 Charleston, SC, USA – It was the third round match-up everyone was hoping for when the draw was made, and it certainly lived up to the hype - Eugenie Bouchard outlasted Venus Williams in a center court thriller on Thursday afternoon to return to the Family Circle Cup quarterfinals, 76(6) 26 64. The two had met once before and it was as close as could be, Williams winning that one in Tokyo last year - and this one was no different, with the two playing over two hours in hot, windy conditions.

Looking back, the most critical point of the match could have come in the first set - Williams actually had double set point at 6-4 in the tie-break, Bouchard reeling off four points in a row from there to sneak out the set. The No.11-seeded Williams rebounded well, racing through the second set and going up an early break in the third at 2-1, but she paid the price for a few costly errors while serving to stay in the match and the No.6-seeded Bouchard capitalized and snuck out the win.

Next up for Bouchard is Jelena Jankovic who survived a barrage of power from Ajla Tomljanovic 75 61 to reach the quarterfinals of the Premier-level Family Circle Cup for the sixth time in her last seven tries. Sabine Lisicki, the No.4 seed, wasn't so lucky, falling to No.14 seed Andrea Petkovic, 61 60. Rounding out the day session winners was Swiss qualifier Belinda Bencic, who beat fellow teenager Elina Svitolina, 67(4) 64 61.

Bencic, who only turned 17 years old a few weeks ago, isn't just through to her first Premier-level quarterfinal now - this is her very first WTA quarterfinal at any level. The night match saw No.9 seed Lucie Safarova upset No.7 seed Samantha Stosur, 36 64 64, rallying from 3-1 down in both the second and third sets to improve to 9-2 head-to-head against her. Full article 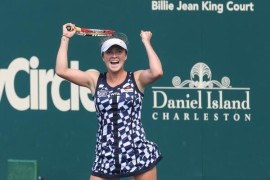 wtatennis.com: April 2 2014 Charleston, SC, USA – The upset bug that bit Serena Williams at the Family Circle Cup on Tuesday night struck again on Wednesday, as Sloane Stephens was ousted by Elina Svitolina. Svitolina broke three times en route to an early 5-1 lead and though things tightened up a bit from there, it was too late - Svitolina slid past the No.5-seeded Stephens in straight sets, 64 64.

As for Svitolina, she continues an absolute breakthrough year. Not only has she scored all four of her Top 20 wins so far this year - Svetlana Kuznetsova at the Australian Open, Roberta Vinci in Paris, Eugenie Bouchard at Indian Wells and Stephens here - but this week she became the No.1 teenager.

Former No.1s Venus Williams and Jelena Jankovic took one step closer to a quarterfinal clash at the Family Circle Cup on Wednesday, both moving through to the third round. The No.11-seeded Williams was the first to advance, though she had it quite a bit tougher, rallying from 5-3 down in the first set and 4-1 down in the second set to beat Chanelle Scheepers, 75 75.

Jankovic, seeded No.2 - and by far the on-paper favorite for the tournament with Serena Williams' departure - cruised past tenacious American Lauren Davis in the night match on center court, 60 63.

Sabine Lisicki, the No.4 seed this week, rallied from 2-0 down in the third to edge Vania King, 75 46 63. Lisicki blasted 12 aces in the match. No.3 seed Sara Errani restored more order in the next match on center, though maybe not the way she wanted - Dutch qualifier Kiki Bertens retired with a low back injury after dropping the first set, 6-3.

Other winners early on in the day were No.12 seed Daniela Hantuchova, No.13 seed Elena Vesnina, Peng Shuai and Swiss qualifier Belinda Bencic. Peng had a dramatic win over No.15 seed Madison Keys, originally leading 61 51 - and again 4-1 in the third set - but eventually winning, 61 67(3) 76(4).

Williams, a three-time champion here and this year's No.1 seed, lost the first five games of the match and though she did end up closing in somewhat, she never really found her range - she also had her thigh taped mid-match. Cepelova, ranked No.78 in the world, ended up pulling it out, 64 64.

"Obviously things didn't go great out there, but she was a great counterpuncher today and hit a lot of balls back," Williams said. "I really knew nothing about her game going into the match, so she played a really good match against me today. And it just wasn't my day - it just wasn't meant to be today."

It has only been three days since Williams won the Premier Mandatory-level Sony Open Tennis in Miami on a much different surface - hardcourts.

In other singles matches, Venus Williams rebounded from a second set disaster to beat Barbora Zahlavova Strycova as the first round of the Premier-level Family Circle Cup wrapped up in Charleston. After taking a routine first set, Williams totally lost control of the match for about half an hour, losing seven games in a row to drop the second set 6-0 and fall behind 1-0 in the third.

Zahlavova Strycova even had three break points to go up 2-0 in the third - but the No.11-seeded Williams found her range just in time, eventually regaining control and closing the tenacious Czech out, 63 06 75. She had four match points at 5-4 in the third but ended up serving it out at love a few games later. Full article

Asked if she thought she could beat #Serena before the match, #Cepelova responds: "No. No I didn't." #FCC2014 pic.twitter.com/WLJqubMsBf