wtatennis.com June 21 2014 's-Hertogenbosch, The Netherlands - CoCo Vandeweghe completed a dream week on Saturday, winning the first WTA title of her young career on the grass courts of the Topshelf Open.

To say that Vandeweghe was a long shot at the beginning of the tournament is an understatement. She wasn't even in the main draw to start - she had to come through qualies - and once she made it through those qualies, there were five Top 20 players in the main draw, led by Simona Halep.

But with a few of the favorites getting bounced early, and some stellar serving during the week - she dropped 81 aces in seven matches, including a whopping 19 against Marina Erakovic in the first round - Vandeweghe went all the way to the title, taking out No.7 seed Garbiñe Muguruza and No.8 seed Klara Koukalova en route to the final, then capping the week with a 6-2, 6-4 win over Zheng Jie.

Though Zheng wasn't seeded, she had just as much grass court cred as anyone in the draw - she did reach the Wimbledon semifinals in 2008, after all. But Vandeweghe was just too good - she lost just one point on her first serve (27 of 28) and never faced a single break point in the 70-minute match.

Zheng vs Vandeweghe in Topshelf Final 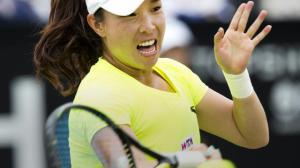 wtatennis.com: June 18, 2014 's-Hertogenbosch, The Netherlands -  - CoCo Vandeweghe has been tested throughout the week at the Topshelf Open, in qualifying and in the main draw, but recorded an impressive straight set defeat of No.8 seed Klara Koukalova to make her second WTA final.

Vandeweghe didn't have to wait long for revenge after losing to Koukalova in a tight three-setter last week in the second round of Birmingham. As has been the case for her all week, her serve was the difference on Friday. She fired nine aces and was 26 of 31 on first serve points, while fighting off the lone break point she faced, en route to a 6-4, 6-2 victory.

While Vandeweghe has been extended to three sets once in qualifying and twice in the main draw this week, fellow finalist Zheng Jie has yet to surrender a set. She raced out to a 5-1 first set lead and a 4-1 second set lead in her 56-minute, 6-1, 6-3 triumph over Magdalena Rybarikova. She was also dominant on her first serve, winning 23 of those 27 points. After losing her first two meetings with Rybarikova, Zheng has now won three straight in their head-to-head.

Zheng, who was victorious in her last WTA final in Auckland in 2012, takes a 4-2 record in WTA finals into Saturday's showdown. This will be the USANA Ambassador's first WTA grass court final, though she was a Wimbledon semifinalist in 2008. Vandeweghe was runner-up at Stanford in 2012 in her one previous WTA final. 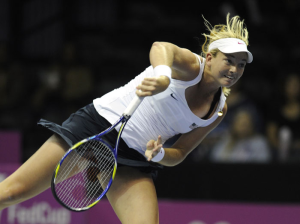 Vandeweghe faced a 5-2 first set deficit and had a set point against her at 6-5 but rallied for a 7-6(3), 6-1 victory over the seventh-seeded Spaniard. In her first WTA semifinal since 2012, Vandeweghe will take on No.8 seed Klara Koukalova, who was a 6-2, 6-4 winner over Yaroslava Shvedova.

Koukalova, who won her first WTA title here in 2005, just topped Vandeweghe last week in Birmingham after being down a set and 5-3. Friday's other semifinal will see Magdalena Rybarikova play Zheng Jie in what will be the first semifinal of the year for both players.

Rybarikova defeated Annika Beck, 6-2, 7-5, the exact same score she beat her by in their one previous encounter in Madrid earlier this year. Up 4-3 against Elina Svitolina, Zheng reeled off eight straight games for a 6-3, 6-0 triumph. The Chinese converted on all six of her break point opportunities and saved four of five on her own serve. 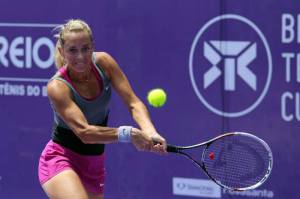 wtatennis.com: June 18, 2014 's-Hertogenbosch, The Netherlands - Simona Halep saw her grass court preparations cut short at the Topshelf Open, succumbing to Annika Beck and an upper back injury in the second round.

Halep, the No.1 seed at the International-level grass court event, did a good job of rallying to win the first set - she was down 4-1 but managed to squeak it out, 7-5 - but down 3-2 in the second set the pain was just a little too much to handle. Beck advanced with a 5-7, 3-2 retirement victory.

The World No.3 is still hopeful for a good run at Wimbledon, where she'll be the No.3 seed.  "I think it was a good match today," she said after the match. "The injury isn't very dangerous, but I was cold on the court and the muscle at my shoulder and rib was contracted, and the physio told me I should stop playing, because it could have gotten worse. But I will be fine for Wimbledon."

Back injuries were something of an epidemic in 's-Hertogenbosch on Wednesday, unfortunately - No.4 seed Carla Suárez Navarro stopped with the same injury, handing Zheng Jie a 7-5, 0-1 victory, and Vania King the same, handing American qualifier CoCo Vandeweghe a 6-7(6), 6-0, 2-1 victory.

The three completed matches were all close encounters though, with No.8 seed Klara Koukalova holding off a late surge to close out German qualifier Mona Barthel, 6-2, 7-6(6), Elina Svitolina clinching a tight first set then rallying from 4-2 down in the second set to upset No.6 seed Kirsten Flipkens, 7-6(4), 6-4, and Yaroslava Shvedova fighting back from set point down at 5-4 in both sets to close out newly-engaged Dutch wildcard Michaella Krajicek in a pair of tie-breaks, 7-6(6), 7-6(4). 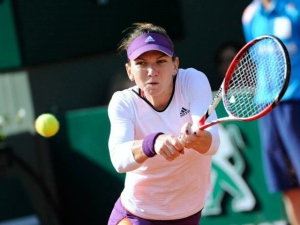 wtatennis.com: June 17, 2014 's-Hertogenbosch, The Netherlands - On a Tuesday with several upsets at the Topshelf Open, Simona Halep got through her opener after a slow start.

Down 5-4 in the first set against qualifier Olga Govortsova, Halep won five straight games to take the first set and go up an early break in the second. She eventually went on to a 7-5, 6-2 triumph, converting on three of four break points while fighting off the only one on her serve. She also improved to 4-0 against the Belarusian.

No.2 seed Dominika Cibulkova was not as fortunate, as Yaroslava Shvedova upended her, 6-2, 3-6, 6-3. Though it was a big upset on paper, Shvedova actually has now beaten the 10th-ranked Slovak three times in six encounters. This was Shvedova's sixth Top 10 win and first since surprising Caroline Wozniacki at Rome in May 2013. Next up for Shvedova is Dutch wildcard and 2006 's-Hertogenbosch champ Michaella Krajicek.

Third-seeded Eugenie Bouchard also went down, with Vania King pulling off a 2-6, 6-3, 6-3 victory over the French Open semifinalist. The American explained how she was able to turn the match around.

No.4 seed Carla Suárez Navarro was a 6-4, 6-2 winner in her opener against last week's Birmingham runner-up, Barbora Zahlavova Strycova. Her sixth win in seven clashes with the Czech was her 35th of the year - two behind Ana Ivanovic for most on the WTA.