wtatennis.com: October 19 2014 Moscow, Russia - In a field with four of the Top 20 players in the world it was the World No.30 who finished first place, as Anastasia Pavlyuchenkova won the Premier-level Kremlin Cup in Moscow.

Pavlyuchenkova didn't end up facing any of those Top 20 players. Three of them - Dominika Cibulkova, Ekaterina Makarova and Flavia Pennetta - lost their opening matches, and the last one left, Lucie Safarova, bowed out in the semifinals.

But Pavlyuchenkova had to take on several of the inspired underdogs who picked them off, most notably her opponent in the final, Irina-Camelia Begu, who was actually responsible for beating both Makarova in the second round and Safarova in the semis.

And Begu brought her A-game to the final, going up a break in the first set and, after Pavlyuchenkova came back and won that set, jumping out to an early 3-1 lead and eventually taking the second set. But the No.6-seeded Pavlyuchenkova saved her best tennis for the third set, soaring out to a 5-0 lead and eventually closing the championship match out after two hours and 29 minutes, 6-4, 5-7, 6-1.

wtatennis.com: October 18 2014 Luxembourg - A year after coming up short in her first WTA final there against Caroline Wozniacki, Annika Beck came back to the BGL BNP Paribas Luxembourg Open on a mission - and this time she went all the way to the first WTA title of her career, not even dropping a set all week.

But once she got out of those it was plain sailing - a 6-2, 6-2 win over Patricia Mayr-Achleitner in the quarterfinals, a 46-minute, 6-0, 6-1 clinic against Czech qualifier Denisa Allertova in the semis and finally a 6-2, 6-1 win over No.4 seed Barbora Zahlavova Strycova in the championship match.

The final was much tougher than the scoreline would suggest, however - Zahlavova Strycova had game point in five of the 12 games Beck won, and the match lasted a fairly beefy hour and 33 minutes.

Beck's first round conquest, Bacsinszky, still leaves with a trophy - she and Kristina Barrois upset No.3 seeds Lucie Hradecka and Barbora Krejcikova to capture the doubles title, 3-6, 6-4, 10-4. Bacsinszky won her fourth WTA doubles title while Barrois got her first WTA title of any kind.

wtatennis.com: October 18 2014 Moscow, Russia - Anastasia Pavlyuchenkova and Irina-Camelia Begu came up winners on Semifinal Saturday at the Kremlin Cup in Moscow and will fight for the Premier-level title on Sunday.

Begu was the first of the two to advance, continuing her breakthrough week with a hard-fought 7-6(5), 1-6, 6-3 victory against the No.4 seed, Lucie Safarova. Safarova's serve was on absolute fire - she held 13 of her 14 service games in the match - but that one break of serve couldn't have come at a worse time, as Begu snuck it out in the second-to-last game of the match before serving the match out.

Not only will this be Begu's first Premier final - she hadn't even been to the quarterfinals of a Premier event before, actually - but this is the first time she's ever beaten two Top 20 players at the same tournament, taking out World No.12 Ekaterina Makarova and World No.17 Safarova so far.

The Romanian now has four Top 20 wins, the other two coming against a No.14-ranked Svetlana Kuznetsova at Marbella in 2011 and a No.9-ranked Caroline Wozniacki at the US Open in 2012. Awaiting her in the final will be No.6 seed Pavlyuchenkova, who had a far easier time of it in the second semifinal of the day, dispatching Czech qualifier Katerina Siniakova in straight sets, 6-2, 6-2.

Pavlyuchenkova is now through to her 10th WTA final - she's 6-3 in the first nine of those - and it's also her third Premier-level final, going 1-1 in her first two (she was a runner-up to Serena Williams at Brisbane in 2013 and defeated Sara Errani for the Paris [Indoors] title earlier this season).

She's also just a win away from becoming the fourth Russian woman to capture the Kremlin Cup in the tournament's 21-year history. The first three were Anastasia Myskina (who won it twice in 2003 and 2004), Anna Chakvetadze (who won it once in 2006) and Elena Dementieva (who won it once in 2007). Pavlyuchenkova beat Begu in straight sets the pair's only previous meeting.

wtatennis.com: October 17 2014 Luxembourg - Barbora Zahlavova Strycova and Annika Beck cruised in straight sets in the semifinals of the BGL BNP Paribas Luxembourg Open and will now fight for the title Saturday.

Beck was the first to advance, ending the breakout run of Czech qualifier Denisa Allertova, 6-0, 6-1. Playing in her first WTA main draw, Allertova was enjoying a dream run, taking out a pair of seeds along the way, too - No.3 seed Sabine Lisicki and No.5 seed Varvara Lepchenko. But that run came crashing to a halt against Beck, who needed just 46 minutes to completely dominate the Czech.

In Moscow, Russia, Lucie Safarova edged Svetlana Kuznetsova in a tight two-setter at the Kremlin Cup. After the departure of the Top 3 seeds - Dominika Cibulkova, Ekaterina Makarova and Flavia Pennetta - the No.4 and No.5 seeds, Safarova and Kuznetsova, respectively, were left as the title favorites. And in an unfortunate situation they were drawn to compete against each other in the quarterfinals.

That quarterfinal took place on Friday afternoon and the two players put on a show, going toe to toe with their massive forehands across two close sets - and early on it was all Kuznetsova, who broke serve in the second game of the match and rode that break to a commanding 4-1 lead in the first set.

Safarova bounced back, reeling off five games in a row to steal the set, 6-4, and hung tough with Kuznetsova throughout the second set, neither player budging on serve through 10 games. But at 5-all Safarova pounced with the only break of the second set, then served it out for a 6-4, 7-5 victory.

Standing between Safarova and the final this week will be Irina-Camelia Begu, who rallied from a first set blowout to beat Tsvetana Pironkova in the first quarterfinal match of the day, 1-6, 6-3, 6-2. Begu had never been to the quarterfinals or a Premier-level event before, let alone the semifinals.

The other two quarterfinals took place later on, with No.6 seed Anastasia Pavlyuchenkova outdoing Russian qualifier Vitalia Diatchenko in three sets, 6-1, 3-6, 6-3, and Czech qualifier Katerina Siniakova outlasting Camila Giorgi in a three-hour-and-three-minute marathon, 7-6(3), 4-6, 7-5. The 18-year-old Siniakova had only won one WTA main draw-level match before this week - she reached the second round of the International event in Istanbul this year. Now, the semifinals here.

wtatennis.com: October 16 2014 Luxembourg - No.4 seed Barbora Strycova was the most dominant of Thursday's quarterfinal winners at the BGL BNP Paribas Luxembourg Open. Zahlavova Strycova surrendered just four points on her first serve in her 6-0, 6-2 defeat of Swedish qualifier Johanna Larsson.

Next up for Zahlavova Strycova is Mona Barthel, whom she is 1-3 against but won their most recent clash in Cincinnati earlier this year. As for Barthel, she was a 6-3, 6-0 victor over Kiki Bertens, reeling off eight straight games from 4-3 in the first set. Thus, she improved to 7-2 in their head-to-head with her third win in a row against the Dutchwoman.

The surprise of the day saw Czech qualifier Denisa Allertova score a 4-6, 6-3, 7-5 triumph over fifth-seeded Varvara Lepchenko to advance to the semifinals of her first WTA main draw event. Allertova will next square off with Annika Beck. The German beat Patricia Mayr-Achleitner, 6-2, 6-2, to make her first WTA semifinal since she kicked off her season in Shenzhen. Beck went into this week on a seven-match skid, but is no stranger to success in Luxembourg, having reached her lone WTA final here a year ago.

The No.4-seeded Safarova dropped 15 aces on Tomljanovic and fought off all seven break points she faced in the match en route to a 7-6(4), 6-2 victory over the similarly-big-serving WTA Rising Star. It's been a banner year for Safarova, highlighted by reaching her first Grand Slam semifinal at Wimbledon and setting a new career-high ranking of No.14 in the world last month after the US Open.

Awaiting Safarova in the quarterfinals will be the No.5 seed, Kuznetsova, who needed two hours and 41 minutes to get by Ukrainian qualifier Kateryna Kozlova, 3-6, 6-3, 6-3. After dropping the first set Kuznetsova went right to work, breaking early in the second and third sets en route to victory.

Ekaterina Makarova and Flavia Pennetta both lost their openers at the Kremlin Cup, leaving the door wide open for Dominika Cibulkova - if she wins her opener on Thursday, she will become the second alternate at the BNP Paribas WTA Finals Singapore presented by SC Global.

The No.2-seeded Makarova was the first of the two to go out, losing to Irina-Camelia Begu, 6-4, 6-4. Pennetta, the No.3 seed, followed Makarova to the sidelines in the feature night match, falling to Camila Giorgi, 7-6(4), 6-4. The only other early winner on Day 2 of the Premier-level event was Alison Riske, who carried her winning momentum from Tianjin to Moscow with a 6-1, 6-2 win over Russian wildcard Darya Kasatkina. Riske won the first WTA title of her career at the Tianjin Open last week.

wtatennis.com: October 14, 2014 Luxembourg - There were mixed results for the BGL BNP Paribas Luxembourg Open's Top 2 seeds on Tuesday, as Alizé Cornet battled on but Andrea Petkovic bowed out.

The No.2-seeded Cornet was the first to take the court and she had a major fight on her hands from Lucie Hradecka, winning the first set easily in 25 minutes but needing an hour and 26 minutes for the second set alone, originally holding three match points at 5-4 but eventually having to fend off two set points - one down 6-5, one down 6-5 in the breaker - to edge the big-hitting Czech, 6-2, 7-6(6).

The No.1-seeded Petkovic wasn't able to find a way through her match like Cornet did, though, going out to an early 3-1 lead against Pauline Parmentier but then totally losing control of the match, the Frenchwoman winning 11 of the next 14 games to take it, 6-4, 6-2, icing the victory with an ace. Parmentier's win over the No.16-ranked Petkovic was the fourth Top 20 win of her career.

In Moscow, inside the Olympic Stadium, Ana Konjuh matched Anastasia Pavlyuchenkova, the No.6 seed, blow for blow. Yet in the end it was Pavlyuchenkova that was left with a smile on her face and a place in the second round. In a match of fine margins, Konjuh, 16, was left ruing her inability to take what few chances came her way. Pavlyuchenkova, by contrast, was more ruthless, claiming the solitary break in the opening set when she clattered a backhand return onto the teenager's baseline.

Konjuh had more joy in the second set, a break in the fourth game the reward for a couple of thumping forehands. Unfortunately, for the Croatian, this was sandwiched between two sloppy service games of her own. This lapse proved costly, Pavlyuchenkova holding onto her slender advantage to complete a 6-3, 6-4 win.

Earlier on, there was disappointment for one of Russia's other title hopefuls, Elena Vesnina, as she crashed out against qualifier Katerina Siniakova, 6-2, 6-2. And Vesnina was not the only surprise casualty. No.8 seed Caroline Garcia also found herself outplayed by an unfancied opponent, losing out to wildcard Aleksandra Krunic, 6-4, 6-2. Other winners included Ajla Tomljanovic and recent Linz runner-up Camila Giorgi. 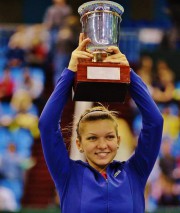 wtatennis.com: October 20, 2013 Moscow - Simona Halep beat Sam Stosur to win the Kremlin Cup in Moscow, her fifth WTA title of an absolute breakthrough year. Only Serena Williams has won more WTA titles than the Romanian this year.  After building a 3-1 lead with a point for 4-1, Halep watched on as Stosur battled her way back into the first set, getting back on serve and pushing it to a tie-break. But the No. 5-seeded Halep cruised through that breaker and the second set too eventually closing out the No.7-seeded Stosur, 76(1) 62.