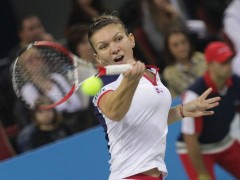 wtatennis.com February 16 2014 Doha, Qatar - - Simona Halep beat Angelique Kerber to win the biggest title of her blossoming career at the Qatar Total Open. The Romanian also extended her winning streak against Top 10 players to six in a row.

The No.7-seeded Halep broke at love in the very first game of the match and never really looked back, eventually breaking serve four times - and holding all eight of her own service games - en route to a comprehensive 62 63 victory against the No.6-seeded Kerber. The match lasted just 66 minutes.

"I made too many easy mistakes at the beginning of the match, but Simona played very well - she played at a high level the whole week," Kerber said. "I was trying to play what I could today, I was giving everything I could, but she deserved to win the title. And I'm still happy about the week." Halep's win over Kerber was her third Top 10 win of the week, having also beaten Sara Errani and Agnieszka Radwanska the last two rounds, and it's the first time she has beaten three Top 10 players at the same tournament. She is also on a six-match winning streak against Top 10 players now.

wtatennis.com February 15 2014 Doha, Qatar - Angelique Kerber overcame a late wobble to defeat Jelena Jankovic and book a place in the final of the Qatar Total Open. Before this year, Kerber had never been beyond the second round in four previous visits to the Khalifa Tennis Complex, but she has been in fine form all week and produced a near-flawless perfomance during her 61 76(6) win over Jankovic.

Simona Halep dug out of a 5-2 first set hole to defeat Agnieszka Radwanska in straight sets, not just scoring the equal-biggest win of her career, but reaching the biggest final of her career too.

The No.2-seeded Radwanska looked headed for another routine victory early on, storming out to a 5-2 lead in the first set, but in one fell swoop the No.7-seeded Halep won eight games in a row to go up 75 30 and take total control of the match, never really looking back en route to a 75 62 triumph.

Awaiting Halep in the final is No.6 seed Kerber. Halep beat Kerber in the pair's only previous meeting, though it was five years ago at an ITF Women's Circuit event and 7-5 in the third set. As an indication of how insignificant that meeting might be, Kerber was ranked No.95 at the time and Halep No.228 - they are now No.9 and No.10, respectively. 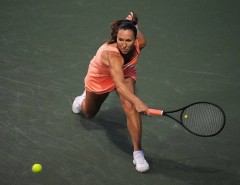 wtatennis.com February 14 2014 Doha, Qatar - Two of the craftiest players in the upper echelon of the women's game - Agnieszka Radwanska and Simona Halep - will clash in the semifinals of the Qatar Total Open on Saturday. The No.7-seeded Halep was the first to move through to the final four, dropping a 52-minute, 62 60 decision on No.4 seed Sara Errani.

It was a stark contrast to the pair's only previous meeting - Errani lost just one game against Halep en route to a 61 60 victory at Miami just under a year ago. Next up for her is the No.2-seeded Radwanska, who cruised past Yanina Wickmayer at night, 62 61. Wickmayer had beaten Radwanska in their very first career meeting four years ago, but Radwanska has now won all four of their meetings since in straight sets - and this one in just 64 minutes.

Angelique Kerber put an end to Petra Cetkovska's run at the Qatar Total Open with a straight set victory in Friday's quarterfinals. Having spent two weeks of her pre-season training program in Doha, Kerber has looked at ease in the surrounds of the Khalifa Tennis Complex all week and required just 50 minutes to brush aside Cetkovska, 61 60. Standing in between Kerber and a place in the final will be Jelena Jankovic, who knocked out Petra Kvitova, 61 63. 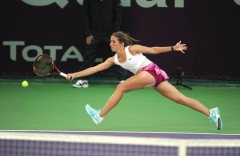 wtatennis.com February 13 2014 Doha, Qatar - Qualifier Petra Cetkovska claimed the eighth Top 10 win of her career when she knocked out top seed Li Na in the third round of the Qatar Total Open. Cetkovska has endured a difficult few years on tour, watching her ranking plummet following injuries to first her right and then her left ankle.

But on Thursday at the Qatar Total Open the Czech was finally given reason to cheer when she knocked out Australian Open champion and top seed Li Na, 76(2) 26 64. Such has been her fall down the WTA's pecking order that Cetkovska did not even make the trip to Australia last month, watching on from her Paris home as Li defeated Dominika Cibulkova to lift her second major.

Agnieszka Radwanska and Petra Kvitova kept flying the flag for the favorites at the Qatar Total Open on Thursday, showing Li Na's exit wouldn't keep them from the quarterfinals. Kvitova had the tougher day at the office, but luckily she had one of her very best serving days in a while - the No.3-seeded Czech fired 15 aces en route to a 76(2) 57 62 win over Lucie Safarova.

The No.2-seeded Radwanska was in a little bit of trouble - a 4-1 first set lead became 4-all before she closed out the first set, 6-4, and she then dropped serve in the first game of the second set - but Croatian qualifier Mirjana Lucic-Baroni had to retire in the next game with a low back injury. 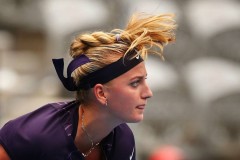 wtatennis.com February 12 2014 Doha, Qatar - Venus Williams had points for a 5-1 lead in the third set, and later a match point in the tie-break, but Petra Kvitova never stopped fighting to win her Qatar Total Open opener on Wednesday. There's a reason Williams is a seven-time Grand Slam champion and former World No.1 - she has a tendency to lift her game against the elite no matter where she's ranked at the time, as her 119 career wins over Top 10 players demonstrates.

She stormed through the second set, 6-2, and built a hefty 4-1 lead in the third set, even holding three points for a seemingly insurmountable 5-1 advantage. But as quickly as Williams built that third set lead Kvitova evened it up, winning five of the next seven games to push the match to a third set tie-break, and after fighting off a match point down 7-6 in that breaker the No.3-seeded Czech wrapped up the two-hour, 32-minute encounter, 62 26 76(7).

Regardless of what happens this week, Li Na will set a new career-high of No.2 in the world next week - but not one to just sit back and let things happen. Li Na battled her way through a very tricky opening match against Magdalena Rybarikova as the No.1-seed took complete control after losing the second set by breaking back in the first game of the third and never really looking back, finishing it off after two hours and 13 minutes, 61 57 62. Meanwhile, No.8 seed Caroline Wozniacki, No.9 Ana Ivanovic, and No.12 Sam Stosur failed to losing to Yanina Wickmayer 6-4 7-5, Klara Zakopalova 4-6 6-1 6-3, and Jana Cepelova 6-4 4-6 6-1 respectively. 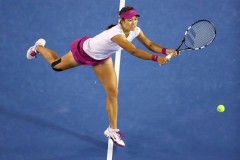 wtatennis.com: February 11 2014 Doha, Qatar - Magdalena Rybarikova edged 2010 French Open champion Francesca Schiavone in the first round of the Qatar Total Open, and next up is the 2011 French Open champion - Li Na. Rybarikova and Schiavone played an absolute grinder, battling for three hours on Centre Court before the Slovak won four points in a row from 3-all in the third set tie-break to end it, 75 46 76(3).

Awaiting Rybarikova in the second round is none other than Li, not just the 2011 French Open champion but now a two-time Grand Slam champion, having won the Australian Open a few weeks ago. There's even more - Li is 12-0 this year, the No.1 seed here and days away from rising to No.2.

Czech Fed Cup heroines Lucie Safarova and Klara Zakopalova, who wrapped up their victory against Spain on Monday - were both winners too. Zakopalova beat Elina Svitolina, 62 64, while Safarova battled to the end to beat No.16 seed Kirsten Flipkens, 57 64 64. The four biggest names in action had mixed results. No.9 seed Ana Ivanovic and No.12 seed Sam Stosur both moved through their first round matches smoothly, but No.10 seed Dominika Cibulkova had to retire at 5-all in the first set against Russian wildcard Alisa Kleybanova due to illness and No.15 seed Eugenie Bouchard was bounced by Bethanie Mattek-Sands, 75 61. Bouchard led 5-3 in the first set and had double set point up 5-4 but Mattek-Sands won 10 of the last 11 games of the match.

Venus Williams served up a storm in her first match of the Qatar Total Open on Monday, beating Petra Martic in straight sets to set up a second round encounter with Petra Kvitova. Leading 4-0 in the first set, Williams let one service game go - she fell behind 15-40 and Martic converted - but the former World No.1 held all seven of her other service games easily, at the loss of just six points in fact, and she never faced another break point en route to a 62 62 triumph.

It wasn't a great day for the favorites at the Qatar Total Open on Monday, with both seeds in action - Roberta Vinci and Sloane Stephens - ousted by qualifiers in the first round. The No.11-seeded Vinci was the first to fall, with Bulgarian qualifier Tsvetana Pironkova storming out to a 63 40 lead with points for 63 50 and, after a slight stumble, closing it out, 63 63. It was a little bit of a revenge mission for Pironkova - Vinci had prevailed in all three of the pair's previous meetings. The No.14-seeded Stephens fell in the night session to Czech qualifier Petra Cetkovska. Things looked dead even at 5-all in the first set, and Stephens even looked like she was about to pounce in that game as she brought up two break points - but Cetkovska held and would eventually win eight of nine games to run away with it, 75 61. The big-hitting Czech reeled off the last seven points of the match.