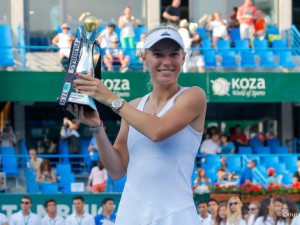 In a dream final at the International-level tournament, the No.1-seeded Wozniacki took on the No.2-seeded Vinci. But they got there in very different ways. Though she cooled off a pair of WTA Rising Stars - Belinda Bencic and Kristina Mladenovic - in straight sets, Wozniacki was pushed to three sets two rounds in a row, against Karin Knapp in the second round and Karolina Pliskova in the quarters. Meanwhile, on the other half of the draw, Vinci didn't come close to losing a set all tournament.

But it was the battle-ready Wozniacki who was better ready for battle in crunch time, completely dominating Vinci in 67 minutes in the final, 6-1, 6-1. Her serve was a stronghold - she fought off all six of the break points she faced and held all seven of her sevice games. The Dane was dangerous on the return too, breaking five times in the match, including in Vinci's last three service games.

In Bastad, Sweden, Mona Barthel captured the third WTA title of her career on Sunday, edging Chanelle Scheepers in a tight two-setter to bring home the Collector Swedish Open crown.

The tournament was somewhat of a "last woman standing" kind of thing - seven of the Top 8 seeds were bounced in the first round, and after No.6 seed Annika Beck was upset in the second round, it was the first WTA draw where no seeds made the quarterfinals since Hobart in January 2009.

But it was Barthel who emerged victorious from all of the chaos, surviving a few particularly tough ones en route to the final - three-setters against Canadian qualifier Gabriela Dabrowski in the second round and Spain's Sílvia Soler-Espinosa in the semifinals, coming from 4-2 down in the third in the latter - and against fellow unseeded player Scheepers in the final she put her rally cap on again, coming back from 5-3 down in the second set to close out the South African No.1 in straight sets, 6-3, 7-6(3). 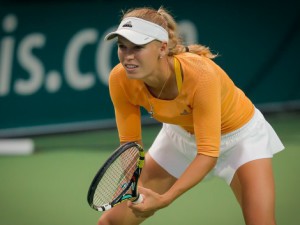 wtatennis.com: July 19, 2014 Istanbul, Turkey - Caroline Wozniacki followed Roberta Vinci into the TEB BNP Paribas Istanbul Cup final on Saturday night, outsteadying WTA rising star Kristina Mladenovic in the semifinals. Wozniacki stayed close to the baseline and absorbed all of Mladenovic's power, redirecting it to all corners as she drew a wealth of unforced errors from her younger opponent.

There were some tense moments towards the end - after storming out to a 6-2, 4-1 lead, Wozniacki watched on as Mladenovic battled through a pair of games to close in to 6-2, 4-3. But Wozniacki has had all kinds of experience in those tense moments, and she finished fast with two quick games to close it out, 6-2, 6-3. Mladenovic hit one last error long on the first match point.

After putting together the best season of her career in 2013, Vinci had her highest year-end finish, No.14, and also set her career-high earlier in the year, No.11 - Vinci had an underwhelming first half of 2014, coming out of Wimbledon ranked outside the Top 20 again and with a 7-17 win-loss record.

And Ana Konjuh may have had something to do with that. In Vinci's first match of the year, and in the first WTA-level match of Konjuh's career, just days after her 16th birthday, Konjuh beat Vinci in the first round of the ASB Classic.  But Vinci came into the rematch a totally different player - she was 7-1 since Wimbledon, after all.

The No.2-seeded Vinci came out completely in control, winning the first four games of the match and, after letting Konjuh back into it with three straight games to catch up to 4-3, she stayed one step ahead of the Croatian qualifier for the next 20 or 30 minutes as the two traded holds back and forth until Vinci found herself stepping up to serve at 6-4, 1-2. That's when the Italian pounced again - five straight games and she had the win, 6-4, 6-2.

wtatennis.com: July 18, 2014 Istanbul, Turkey -  WTA rising Star 16-year-old Croatian qualifier Ana Konjuh beat Elina Svitolina in the first match of the day, 6-4, 1-6, 6-1. Given the lopsided nature of the second and third sets, the key moment in the match could have been the first set, as Konjuh dug out of a 4-1 hole to take it, 6-4.

It's that kind of mature play that has kept Konjuh rising up the rankings, and she's now the youngest player to reach a WTA semifinal since a 16-year-old Donna Vekic made the Tashkent final in 2012. Awaiting Konjuh in the semifinals is No.2 seed Roberta Vinci, who continued her summer revival with a 6-0, 6-2 win over No.6 seed Kurumi Nara, never getting broken during the 49-minute steamrolling.

wtatennis.com: July 17, 2014 Bastad, Sweden - Kaia Kanepi continued her fine recent form with a quick-fire win over Richel Hogenkamp in the second round of the Collector Swedish Open. Having needed three sets to defeat home favorite Johanna Larsson in the opening round, Kanepi wasted little time in seeing off qualifier Hogenkamp, 6-3, 6-1, in exactly an hour.

Kanepi struggled on serve initially, throwing in four double faults, and handing over three breaks, on her way to the opening set. She rammed home this advantage at the start of the second, finally settling into a groove on her serve and rattling off four straight games as she cantered across the finish line.

A succession of upsets has left Kanepi, the World No.54, as the highest-ranked player left in the draw and she is quietly confident about her chances of going all the way. Kanepi's quarterfinal opponent will be Mona Barthel, after she came from a break down in the final set to defeat Gabriela Dabrowski, 6-4, 3-6, 6-4. Also taken the distance was Sílvia Soler-Espinosa, who defeated Julia Goerges, 4-6, 6-1, 6-3, to set up a meeting with Alexandra Panova.

wtatennis.com: July 17, 2014 Istanbul, Turkey - Qualifier Ana Konjuh and No.2 seed Roberta Vinci were among those booking quarterfinal berths on Thursday at the TEB BNP Paribas Istanbul Cup. From 2-2 in the third set against Misaki Doi, 2013 Australian Open and US Open junior champion Konjuh won three straight games and held on from there en route to a 6-4, 6-7(3), 6-4 triumph.

Not only did it put Konjuh into her first WTA quarterfinal, but the 16-year-old Croat became the youngest WTA quarterfinalist since Donna Vekic at Tashkent in September 2012. Her next opponent will be WTA Rising Star Elina Svitolina.

As for Vinci, she was up 6-3, 4-1 on Alexandra Dulgheru when the Romanian qualifier retired with a right shoulder injury. That improved Vinci to 4-0 in their head-to-head, including a straight set victory just last week in Bucharest - where the Italian reached her first WTA final in a year. Next up for Vinci is sixth-seeded Kurumi Nara, who was a 7-6(5), 6-7(3), 6-2 winner over Czech qualifier Katerina Siniakova in two hours and 52 minutes. The Japanese came into this week ranked a career-high No.38.

Also advancing was No.8 seed Karolina Pliskova over Shahar Peer, 6-2, 7-5. That set up a showdown with No.1 seed Caroline Wozniacki, whom she is 0-2 against though she extended the Dane to a third set in both meetings. 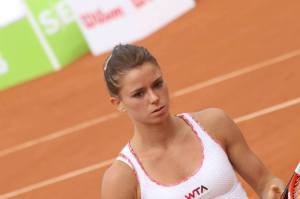 No.3 seed Giorgi's title hopes was dashed by Dabrowski on Wednesday. Photo swedishopen.org

wtatennis.com: July 16, 2014 Bastad, Sweden - Gabriela Dabrowski caused the latest upset at this year's Collector Swedish Open when she knocked out No.3 seed Camila Giorgi on Wednesday.

Following the opening round exits of the top two seeds, Alizé Cornet and Anastasia Pavlyuchenkova, Giorgi's potential path to a maiden WTA title had opened up invitingly, but her hopes were dashed by World No.236 Dabrowski, who made a mockery of her lowly ranking to triumph, 3-6, 6-3, 6-2.

While Giorgi was seeing her title hopes slowly slip away, the only other seed left standing in the bottom half, María-Teresa Torró-Flor, was making a far brisker exit. The No.7 seed lasted just 57 minutes against Julia Goerges, going down 6-2, 6-0.

Remarkably, these two defeats meant that from the original eight seeds just Annika Beck had made it through to the second round. However, before the day was out she also bit the dust, coming within two points of a quarterfinal place only to lose 2-6, 6-4, 7-6(2) to Lara Arruabarrena.

wtatennis.com: July 16, 2014 Istanbul, Turkey - A day after recording the third 6-0, 6-0 win of her career, top-seeded Caroline Wozniacki was pushed quite a bit more but managed to reach the quarterfinals of the TEB BNP Paribas Istanbul Cup. After dropping the first set to Karin Knapp, Wozniacki cruised to a 5-0 lead in the second set and eventually won comfortably, 4-6, 6-2, 6-1.

A week after falling to Stefanie Voegele in straight sets in the second round of Bad Gastein, No.4 seed and WTA Rising Star Elina Svitolina converted on five of six break points in her 52-minute, 6-0, 6-3 second round triumph over the Swiss.

Kristina Mladenovic and Francesca Schiavone beat seeded opponents to set up their maiden meeting in the quarterfinals. Mladenovic broke serve five times and saved nine of 10 break points on her own serve in her 6-1, 6-3 triumph over third-seeded Klara Koukalova, in the process advancing to her first WTA quarterfinal since last September. Schiavone, who also hadn't been to a WTA quarterfinal since September, was a 6-1, 6-4 winner over No.7 seed Bojana Jovanovski.