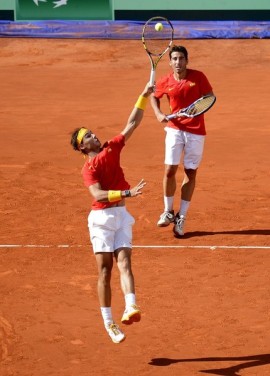 Rafa Nadal and Marc Lopez made sure Spain got back to World Group on Saturday. Photo daviscup.com

daviscup.com: September 15, 2013 by Stuart Fraser: Madrid, Spain - It is the icing on the cake for Rafael Nadal. After a long six weeks on the road, the world No. 2 can return to his home in Mallorca on Sunday with two ATP titles, a Grand Slam and the contentment that he has helped Spain secure its place in the Davis Cup by BNP Paribas World Group for the eighteenth successive year. This was a remarkable effort from a man who was described by his captain Alex Corretja after day one as coming from “a different planet”.

Impressively shaking off the jet lag from his transatlantic trip from New York to Madrid, Nadal returned to the court for the doubles, teaming up with Marc Lopez to beat Denys Molchanov and Sergiy Stakhovsky 62 67(6) 63 64 and seal a 3-0 victory against Ukraine in the World Group play-off. In reality, Spain should expect to be playing at a higher level in the competition than this but Corretja was delighted nonetheless that his team quickly and efficiently got the job done. “Obviously we always like to fight to get into the final and not to stay in the World Group but that was the case this year,” he said. “We needed to stay in the World Group, we fought for that and we stay.

Hopefully next year it’s going to be a different story.” Nadal was playing doubles in Davis Cup for the first time since 2006 and he and good friend Lopez got off to a storming start, racing to a 40 lead before clinching the set in 31 minutes as Nadal played a stunning angled drop volley. Full article

Spain Goes Up 2-0 vs Ukraine After Nadal, Verdasco Opening Victories 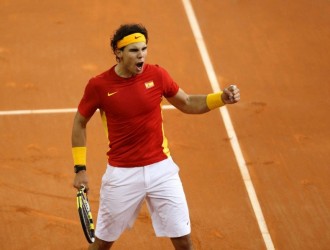 Nadal gave Spain a boost for a 2-0 lead. Photo daviscup.com

daviscup.com: September 13, 2013 By Stuart Fraser It was always going to be the toughest of challenges for Ukraine to beat Spain on clay. After an opening day in which Ukraine find themselves 2-0 down, it will take nothing short of a miracle for the visitors to reach the Davis Cup by BNP Paribas World Group for the first time and break the host’s 17-year spell amongst the elite.

The first match had to go the way of Ukraine if they were to have a chance of an upset in Madrid but after Alexandr Dolgopolov took the first set, Fernando Verdasco fought back to win 3-6 6-4 6-4 6-2.  And any hope that Sergiy Stakhovsky had of newly-crowned US Open Champion Rafael Nadal feeling the effects of his transatlantic journey were quickly dispelled as the Spaniard won 6-0 6-0 6-4. Spanish captain Alex Corretja could not quite believe what he was seeing from his star man. “I think he’s from a different planet,” he said. “This is almost impossible what he’s done today, coming from a different surface and time schedule. He spends the whole summer in the States and he came here and won nil and nil in the first two sets. I think only very special people can do that and Rafa is one of them.”

Spain can now clinch victory with a win in the doubles, for which Corretja confirmed that Nadal will replace Tommy Robredo and play alongside Marc Lopez. It will be the first time that the pair, who are good friends, have played together in Davis Cup, although they have had success in the past with four ATP titles, including two Masters victories at Indian Wells. Full article

Rafa Nadal Back in Davis Cup Action For Spain vs Ukraine 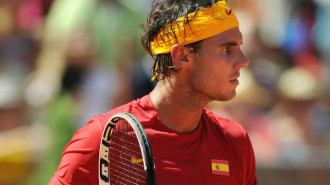 Nadal back in Davis Cup action for Spain. Photo saidaonline.com

Reuters: September 10, 2013 by Lain Rogers  - Spain captain Alex Corretja will wait until Rafa Nadal arrives in Madrid before deciding whether the U.S. Open champion should play in Friday's singles in the Davis Cup World Group playoff at home to Ukraine.

World No.2 Nadal won his second Flushing Meadows crown on Monday when he beat top-ranked Novak Djokovic in the final and after a day's rest in New York will arrive in the Spanish capital on Wednesday.

The 27-year-old is back in the Davis Cup for the first time since helping his country defeat Argentina in the 2011 final in Seville. Spain, champions three times in the last five years, need to beat Ukraine to protect their elite World Group status after losing in Canada in the first round in February.

"The important thing is Rafa will be here tomorrow," Corretja told a news conference on Tuesday at Madrid's Magic Box arena where the tie is being played on Nadal's favoured red clay and where he won the Masters event in May.

"We will evaluate his condition and decide what is best for the team. The key thing is he feels as comfortable as possible when he gets here."

With a fully-fit Nadal back, Spain will be overwhelming favourites in the three-day tie which features two singles matches on Friday, Saturday's doubles and the reverse singles on Sunday. Corretja has also selected Tommy Robredo, who reached the last eight at the U.S. Open before falling to Nadal, Fernando Verdasco and doubles specialist Marc Lopez. Lopez said it would be "special" if he could partner Nadal in the doubles. "But the important thing is not that, but to play and win the point and that is what we are training for," he added.

Ukraine's top-ranked player is number 40 Alexandr Dolgopolov and he will need to be at his very best if his team are to have a chance of an upset in the first meeting in the competition of the two nations.

"It's better for us that Rafa won in New York," Dolgopolov joked. "But Rafa has shown he can adapt quickly, even if he arrives on Friday. "To beat Rafa you can't make a single mistake and you have to hit the corners of the court. You have to play your best tennis and be at the top of your game to even attempt it."

Nadal has won 20 of his 21 Davis Cup singles, including 16 of 16 on clay, his sole reverse coming on indoor carpet against Czech Jiri Novak in his first appearance in February 2004. > More on Davis Cup News