Michael Venus Battles Back to Stun Treat Huey in 5 Sets; New Zealand to Group One 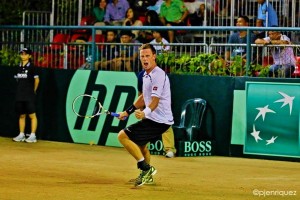 September 15, 2013 ITS Staff: Cebu, Philippines - Former ITA/NCAA All-American Michael Venus stormed back from the claws of defeat against another former All-American from University of Virginia Treat Huey of the Philippines to lead New Zealand to a dramatic 3-2 victory over the Philippines. The win by the Kiwis secured a spot in next year’s Davis Cup Asia-Oceana Group I along-side China, Chinese Taipei, India, Korea and Uzbekistan.

In a final day that featured over ten hours and ten sets of intense see-saw battle which started Sunday mid-afternoon lasting until the wee hours of Monday morning at the Plantation Bay Resort in Lapu-Lapu City, the Kiwis No.2 Venus came back from two sets down to outlast recent U.S. Open doubles quarter-finalist Huey 5-7 4-6 6-3 6-1 6-3. 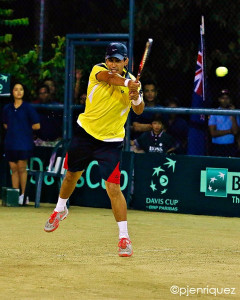 New Zealand took control of the tie after Day One on Friday winning both singles rubbers to take a commanding 2-0 lead. The Philippines took the doubles rubber on Saturday to close the gap 2-1. In the first match on Sunday, Philippines No.1 Ruben Gonzales stunned New Zealand’s No.1 Rubin Statham in five sets to level the tie at 2-2. The former Fighting Illini player outlasted Statham 7-6(2) 4-6 1-6 7-5 8-6 in an epic victory.

Huey, who was substituted for No.2 Johnny Arcilla by team captain Roland Kraut, and who kept the hosts chances alive on Saturday with a doubles win with partner Francis Alcantara, appeared headed for victory after he won the first two sets. The left-hander Huey, however, could not close out the match as Venus relentlessly refused give in without making his Filipino opponent work for every point. 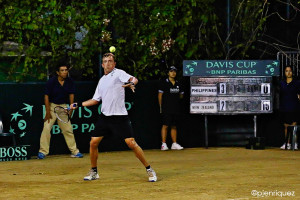 Statham could not clinch the tie against Gonzales. Photo by PJ Enriquez

After saving a match point on Friday in the first rubber against Gonzales, Venus again dug deep down and managed to turn the tide around after he broke Huey in the middle of the third set then seemed to gain momentum as the match progressed winning the next three sets to secure the win for the Kiwis. 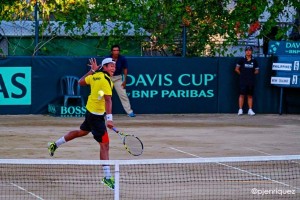 Recent U.S. Open doubles quarter-finals Treat Huey has been inserted by Philippine team captain Roland Kraut replacing No.2 Johnny Arcilla to play against No. 2 Michael Venus in the fifth and deciding rubber.  The winner of the tie will gain promotion to Asia/Oceania Group I.  See complete details 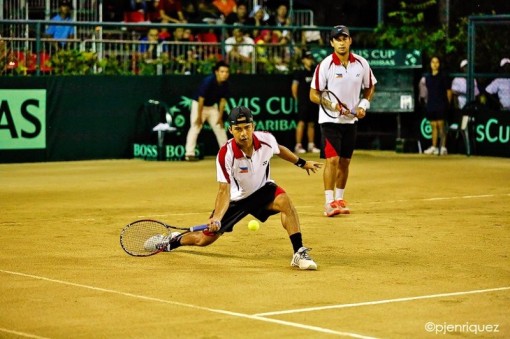 Huey, who last week reached the U.S. Open doubles quarter-finals with British partner Dominic Inglot, led the charge with blitzing serves and solid returns breaking the Kiwis at least once in each of the sets. The 2009 Australian Open Junior doubles champion Alcantara, meanwhile, dominated the net with quick reflexes and deft touches that kept their opponents off-balance most of the one hour and 45 minute match.

With the tie standing at 2-1, New Zealand will now try to clinch the victory on Sunday in the first reverse singles pitting No.1 Kiwi Joel Statham against the hosts No.1 player Ruben Gonzales. The former Fighting Illini Gonzales had a match point before losing in five sets to No.2 Michael Venus in the opening rubber on Friday.

If Gonzales is able to defeat Statham, the fifth and deciding rubber will rest on the shoulders of Venus and Johnny Arcilla to give their respective nations a spot in the Asia-Oceania Group I in 2014. See details

Venus Outlasts Gonzales, Statham Tops Arcilla to Give New Zealand a 2-0 Lead Against the Philippines 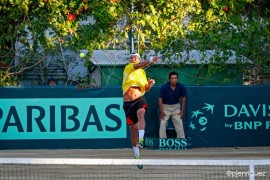 September 13, 2013 ITS Staff – Cebu, Philippines - New Zealand have taken a big 2-0 lead in its Davis Cup Group II Asia/Oceana tie against the Philippines after day one in Lapu-Lapu City in the island of Cebu.

In the opener, Kiwi No.2 Michael Venus defeated Philippines No.1 Ruben Gonzales in five sets on the clay courts. Venus saved a match point in the fourth set before taking over in the final set 6-4 3-6 6-4 6-7 6-0.

Gonzales was one point away from giving the Philippines an opening lead at 5-4, 40-30 in the fourth set but Venus recovered to even the score at 5-5. In the tie-breaker, the former University of Illinois Fighting Illini star again took a 4-2 lead but Venus, an ITA/NCAA 2009 All-American from LSU, again managed to claw back before extending the match to five sets where he dominated the rest of the way. 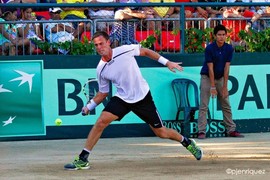 In the second rubber, New Zealand’s No.1 Rubin Statham battled severe body cramp to beat his local No.2 Johnny Arcilla in straight sets 6-4 6-2 6-4.

US Open Men’s Doubles quarterfinalist Treat Huey and 2009 Australian Open Junior Doubles champion Francis Casey Alcantara will play the doubles rubber on Saturday against Venus and Marcus Daniel. Reverse singles rubber is slated for Sunday. The winner of the tie will gain promotion to Asia/Oceania Group I. Details at daviscup.com 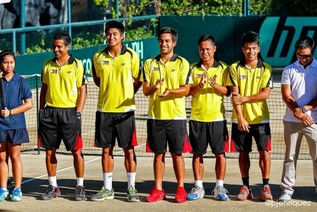 The tie will be held on September13 to15, Friday thru Sunday at Plantation Bay Spa and Resort in Lapu-Lapu City in Cebu. Philippines will host New Zealand in the Asia/Oceania Zone Group II finals and the winner will get promoted to Group 1 next year. The two nations have met five times previously, with Philippines winning three of the five meetings. However, it was New Zealand who emerged triumphant from their last meeting, winning 5-0 in 2011.

Philippines defeated Thailand 4-1 in their Asia/Oceania Zone Group II second round tie. Philippines gained an early advantage in the tie when Wishaya Trongcharoenchaikul was forced to retire in the third set of his opening rubber against Ruben Gonzales. Danai Udomchoke levelled the tie at 1-1 after the first day. Francis Casey Alcantara and Treat Huey then won the doubles to put Philippines 2-1 up before Ruben Gonzales sealed victory with a stunning upset win over Thai ace world no. 207 Danai Udomchoke 6-4 6-3 6-2 in the fourth rubber to secure the tie 3-1. 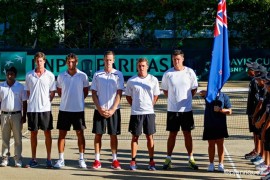 New Zealand, who  is bidding to bounce straight back into Group I in 2014, completed just one rubber, and lost it, in their Asia/Oceania Group II second round tie against Pakistan, but were handed the victory due to an unplayable court at neutral venue Myanmar. Members of the Kiwi squad are singles World No. 293 Jose Statham, No. 372 Michael Venus, No.447 Artem Sitak, and No.586 Marcus Daniell.

Most likely to be nominated by the Cebuana-Lhuillier sponsored Philippine team captain Roland Kraut in the doubles, the third rubber on Saturday, will be World ATP No.28 doubles star Treat Huey with either Gonzales, doubles ranked No. 188 or 21-year old Francis Alcantara, the 2009 Australian Open Junior Doubles champion. Last April Huey and Alcantara posted a convincing straight set victory over Thailand’s Nuttanon Kadchapanan and 17-year-old Pruchya Isarow 6-3 6-3 7-6(4).

Alcantara was selected to compete at the 2013 NCAA Doubles championship in Illinois last May while Johnny Arcilla recently won the singles PHILTA National Championships held to weeks ago in Manila. More details on Davis Cup