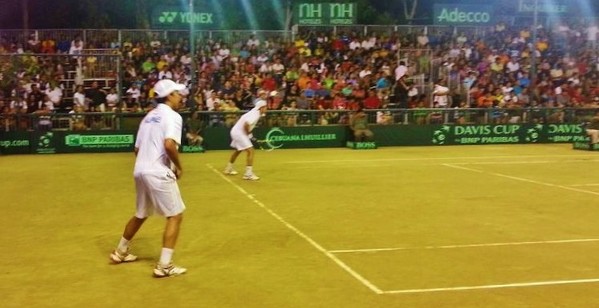 Huey and Gonzales defeated Syria's Issam Taweel and Marc Abdelnour 6-0,6-3, 2-6, 6-2 to the delight of the home crowd at the center court of the Plantation Bay Resort and Spa in Lapua-Lapu City.

The win placed Philippines in an insurmountable lead going to Sunday’s reverse singles rubbers with a 3-0 lead. The Cebuana Lhuillier-sponsored Philippine Davis Cup team entered Day 2 leading 2-0 after reigning PCA Open champion Johnny Arcilla and Gonzales won their singles rubber on Friday. The “King of Clay”, whose name Arcilla in Spanish means “clay”, defeated Taweel  6-4, 5-7, 6-1, 6-2 while Gonzales followed with a 6-4, 7-6 (1), 6-2 win over Abdelnour. 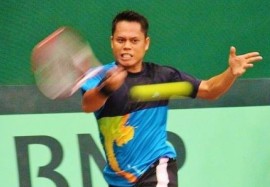 On Sunday, the Syrians didn’t want to leave empty-handed. Beaten in their opening encounters, world No. 925 Issam Haitham Taweel defeated Vicente Elberto Anasta 7-6(8) 6-1 6-4 before Marc Abdelnour triumphed over Huey 7-6(2) 6-2 as the visitors managed a respectable finish to their first round tie.

Syria will be on the road again in April when they travel to Kuwait in a bid to stay in Asia/Oceania Group II, while Philippines will host Thailand in the second round moving one step closer to promotion to Group I in 2014.﻿ Thailand has won the last two meetings, but the Philippines holds a 3-2 series advantage. The last time the two countries met was in 1999. In their last meeting Thailand defeated the Philippines on their home soil in 1999.

Last year the Philippines fell short of advancing to Group 1 when they lost to Indonesia in the finals held in Jakarta. In 2011, the Cecil Mamiit-led Philippine squad advanced to Group 1 but lost to Japan, 3-1, subsequently losing to Chinese Taipei, 3-2, in the relegation play-off held here in the same venue.﻿﻿﻿﻿ More Recap, Video below. Read more on Randy Villanueva's article: Tennis and Tourism

A Snap Shot: A view from the sidelines at the Plantation Bay and Spa venue during Friday's singles rubber. Photo by Randy Villanueva

DAVISCUP.COM: In Colombo, Sri Lanka, Harshana Godamanna kept the home team in the tie with a timely 6-4 6-3 6-4 win over Aqeel Khan in the fourth rubber before veteran Aisam Qureshi clinched the tie for Pakistan with a 6-2 3-6 6-3 6-3 victory over Dineshkanthan Thangarajah of Sri Lanka to advance to a second round meeting with New Zealand while the loser faces a relegation play-off in April against Lebanon to avoid slipping out of Asia/Oceania Zone Group II in 2014.

DAVISCUP.COM: In Meshref, Kuwait - Kuwait was forced to hand visitors Thailand the victory and a tie with Philippines in the Asia/Oceania Group II second round after Abdullah Maqdas retired from the first reverse singles tie with a left foot injury. Maqdas had led Danai Udomchoke 62 03 when the injury forced him to quit just an hour and six minutes into the fourth rubber to hand Thailand an unassailable 3-1 lead. Pruchya Isaro compounded Kuwait's misery by winning the dead fifth rubber a minute quicker than that, defeating Nasser Al-Obaidly in 65 minutes. Kuwait now need to defeat Syria in the play-off in April if they are to avoid relegation to Asia/Oceania Group III in 2014.

DAVISCUP.COM: In Auckland, New Zealand – New Zealand's singles stalwarts Daniel King-Turner and Artem Sitak delivered two more wins for thier country on Sunday, picking up where King-Turner and Marcus Daniell's decisive doubles victory left off on Saturday. King-Turner wasted little time in defeated Ibrahim Abou Chahine 60 61 in just 45 minutes, while his team-mate Sitak was in even more of a hurry in demolishing Michael Massih 6-0, 6-0 in just 38 minutes. New Zealand will now play the winner of Pakistan versus Sri Lanka in April for a chance of promotion the following September. Lebanon, meanwhile, will play the loser of that tie in what will be a battle to avoid the drop to Asia/Oceania Zone Group III in 2014.﻿﻿

> Davis Cup Past - A Snap Shot