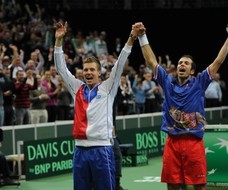 April 2, 2013: ITS Staff - Defending champions Czech Republic will be tested by Kazakstan in this year’s quarter-final match-up with the Tomas Berdych and Radek Stapenek looking to avenge their defeat, at the hands of Mikhail Kukishkin and his Kazakh teammates, in 2011.

The Czech team, who upset Spain in the 2012 finals, reached the last eight after a tough battle against the Federer-less Swiss team leaving Stanislav Wawrinka, Henri Laaksonen, and Marco Chiudinelli to provide the resistance in a highly entertaining tie held in Geneva. Highlighted by the longest rubber in the Davis Cup history, the doubles rubber lasted seven hours and two minutes which saw the fifth set alone reach 46 games with the Czechs’ Berdych and Lukas Rosol coming out on top 6-4, 5-7 6-4 6-7(3) 24-22. The fifth set took 3 hours and 35 minutes after Chiudinelli double-faulted on match point. The Swiss team saved 12 match points in the epic contest.

The Swiss win was a Pyrrhic victory for Berdych as the 27-year old suffered a wrist injury subsequently pulling out of the following event in Montpellier. After three week’s rest, Berdych just missed out winning the Marseille final when he squandered a match point at 6-5 in the second set tie-breaker against Frenchman Jo Wilfried Tsonga. In Dubai last March, he reached the semi-finals which included an upset win over defending champion Roger Federer after saving three match points. In Indian Wells, Berdych reached the semi-finals losing to eventual champion Rafael Nadal, and last week at Miami, he reached the quarter-finals bowing out to Richard Gasquet.

Thirty four year old Stepanek, last year’s finals hero, who took their Davis Cup trophy on home grounds last November, will see action this weekend after missing the first round tie against Switzerland due to neck injury that required surgery at the beginning of the season. Stepanek won the decisive rubber against Spain’s Nicolas Almagro becoming only the second player 30 years or older to clinch a deciding Davis Cup finals rubber in its storied history.

At the other side of net, the Kazaks reached the quarterfinals with a 3-1 victory over Austria. Both Andrey Golubev and Evgeny Korolev upset the highly-rated Jurgen Melzer. All three Kazaks entered the Top 50 ATP rankings, career highs, two years ago: No.49 Kukushkin, No.33 Golubev, and No.45 Korolev, but all dropped out of the Top 100 lately due to various injuries with their current rankings at No.156, No.205, and No. 187 respectively. Probable result: Czech Republic 4 Kazakhstan 1 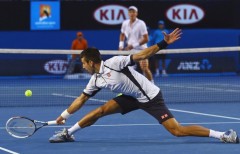 Boise - World No. 1 Novak Djokovic will lead Serbia against last year’s semi-finalists Americans No.20 Sam Querrey and No.23 John Isner in Boise, Idaho. Alongside the reigning four-time Australian Open champion will be No.44 Viktor Troicki in singles.

Djokovic may be nominated by Serbian captain Bogdan Obradovic to play doubles with 36-year old wily veteran Nenad Zimonjic who is currently ranked No.22 in ATP Tour doubles. Zimonjic won Wimbledon twice in doubles in 2008, 2009 and the French Open in 2010.

Although struggling early this season due to injuries, a healthy 6-foot-9 Isner could be the key to the Americans advancing again to the semi-finals. The big-serving University of Georgia graduate was the hero in reaching last year’s final four appearance beating Roger Federer and Jo-Wilfried Tsonga on clay before losing to Spain.

Querrey, who stands 3 inches shorter than Isner, boasts a stunning win over Djokovic on October 31, 2012 at the BNP Paribas Masters in Paris in the second round. Djokovic avenged the loss in in Indian Wells two weeks ago winning in straight sets 6-0 7-6. Probable result: USA 3 Serbia 2﻿﻿

Vancouver - Canada will be spearheaded by big serving Milos Raonic, ATP No.16, against a formidable Italian team led by World No. 19 Andreas Seppi and No. 36 Fabio Fognini. The 22-year old Raonic may have the edge in singles since the rubbers will be played on indoor hard-courts at the Doug Mitchell Thunderbird Arena in Vancouver. The tie may be decided by the doubles rubber giving Canada an advantage via world ranked No.6 Daniel Nestor who has eight Grand Slam titles and finished last year, with Max Mirnyi, as No. 2 in ATP Doubles in team rankings with a 4-2 record in finals.

Raonic helped Canada stun five-time champions Spain 3-2 in the first round by winning 2 singles rubbers and a spectacular win by Frank Dancevic in one of the singles rubber over Marcel Granollers. Raonic played his first tournament of the year in Brisbane losing to eventual finalist Grigor Dimitrov in the second round before reaching the fourth round of the Australian Open losing to Roger Federer. The Montenegro-born Canadian won his third consecutive SAP Open in San Jose last month earning a finals victory over Tommy Haas.

In the first round, Canada defeated Spain who had a depleted squad with three players missing: No.4 David Ferrer﻿, No.5 Rafael Nadal, and No.11 Nicolas Almagro.﻿ Probable result: Canada 3 Italy 2﻿﻿﻿