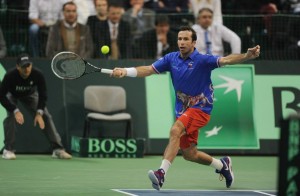 daviscup.com November 17 2013 Belgrade - Radek Stepanek wrote his name into the history books on Sunday after assuming hero status for the second-year running as Czech Republic defeated Serbia 3-2 in the Davis Cup by BNP Paribas Final in Belgrade. Stepanek became just the third player in history to win two Davis Cup Final live fifth singles rubbers, and the first man ever to do so on consecutive occasions, after bypassing Serbian youngster Dusan Lajovic for the loss of just five games.

Having led the Czechs to a 3-2 triumph with victory over Nicolas Almagro in the fifth rubber of the 100th Final in Prague last year, 34-year-old Stepanek was quick to seize the opportunity when handed another chance of glory in tennis’ ultimate team competition. The world No. 44 bossed his way past 23-year-old Lajovic 63 61 61 in an hour and 52 minutes to deliver the visiting nation its second successive Davis Cup crown.

Swarmed by his teammates after winning the decisive point, the Czech eventually broke away from his teammates to bound jubilantly around the court in front of the vociferous travelling Czech contingent. "I don't think words can describe it," said Stepanek, when asked to describe his emotions. "To defend this trophy means the world for us right now. For our country, waiting 32 years for a second title, now we are one of the five countries who have been able to defend a title. “We made history today.”

Stepanek’s triumph saw Czech Republic become the first away team to win the Davis Cup since Spain prevailed in Argentina in 2008. It is also the first time an away team has won the title in a live fifth rubber since Mario Ancic won the decisive point for Croatia in Slovak Republic in 2005.

The Czechs are worthy champions and their performance throughout the weekend was commendable, but the Serbian team were always going to be up against it in the Final following Friday’s news that Janko Tipsarevic would be unable to fill the second singles spot after failing to adequately shake off a heel injury. In the decisive rubber more than any other, his absence was painfully exposed.

Stepanek simply picked Lajovic apart, mixing spins and slice and trading punishing forehands and cute touches at the net in equal measure, but the encounter was a huge ask of a promising young player who hadn’t managed a Tour-level match win in 2013. “You are either going to rise up and play your best tennis or the player in front of you is going to do the same thing,” reasoned Serbia captain Bogdan Obradovic. “In this moment Stepanek played maybe even the best tennis that he has played in his life. He played a perfect match.”

Serbia, led by Novak Djokovic, played its part in an entertaining Final and kept its hopes of a first title since 2010 alive courtesy of their incomparable world No. 2. With Serbia trailing 2-1 going into Sunday’s opening reverse singles rubber Djokovic put in a champion’s shift, nullifying Berdych’s power off the ground to square the tie at 2-2 following a battling 64 76(5) 62 triumph.

The decision to leave Novak Djokovic out of the doubles rubber by the Serbian team was "like leaving a Ferrari in the garage", Stepanek said. The doubles match was the critical part of the with Djokovic winning both his singles ties and Stepanek, along with stand-in captain Vladimir Safarik, said they were surprised the world number two was rested. 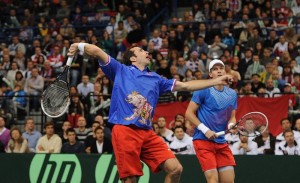 daviscup.com November 16 2013 Belgrade -  Czech Republic will take a 2-1 lead into the last day of the 2013 Davis Cup by BNP Paribas Final after a doubles masterclass from Tomas Berdych and Radek Stepanek in Saturday’s all-important third rubber earned the visitors a crucial advantage.

“These guys are unbelievable,” said buoyant stand-in Czech captain Vladimir Safarik of his doubles team after they extended their Davis Cup doubles record together to 14-1. “Their record is amazing. They played an unbelievable game. We are 2-1 up and it’s just one step to make tomorrow." 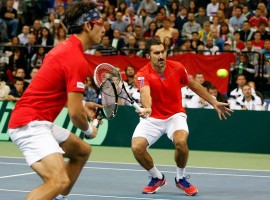 "We just put all the pressure on them and we are in the best possible position after Saturday,” added Berdych. “I have nothing to lose [tomorrow]. It's a huge challenge to play Novak on his own court."

Saturday’s doubles had been billed as a must-win encounter for both teams, perhaps even more so for Serbia who will now have to rely on either world No. 117 Dusan Lajovic or No. 238 Bozoljac to bring the title home for the 2010 champions should Djokovic safely negotiate Berdych in the fourth rubber.

In Zimonjic and Bozoljac, Serbia could call on a pairing that had already proved their mettle against the world’s best by defeating USA’s Bob and Mike Bryan in this year’s quarterfinals. But Berdych and Stepanek are a cut above the rest in this competition, especially on their favoured surface. Their only defeat in 14 previous rubbers together came against Feliciano Lopez and Fernando Verdasco on clay in the 2009 Final, and there appeared to be little chance of a slip up in a match of this magnitude. Full article 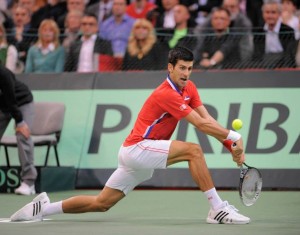 daviscup.com November 15 2013 Belgrade -  Serbia and Czech Republic are locked at 1-1 after Novak Djokovic and Tomas Berdych claimed straight-set victories on the opening day of the 2013 Davis Cup by BNP Paribas final at the Belgrade Arena.

World No. 2 Djokovic took two hours and ten minutes to see off the challenge of veteran Radek Stepanek 75 61 64, before Berdych levelled the tie with a 63 64 63 win in one hour and 53 minutes over world No. 117 Dusan Lajovic.

Djokovic emerged onto court to a hero’s welcome for the opening match against Stepanek and was on form right from the off, losing just one point in his first three service games. The Serb broke for 42 when Stepanek put a drop shot wide but got a little tight when serving for the opening set at 53 and surrendered the break when he sliced wide.

A stunning cross-court pick-up after a lengthy rally earned Djokovic two set points on Stepanek’s serve at 65 and he only needed one, firing a backhand past the Czech at the net to claim a tight opening set in 56 minutes.

The second set was not so closely fought as Djokovic won five straight games from 11 to race to a two-set lead. Stepanek, however, put up a better fight in the third set before he was broken at 44 after a stunning low backhand return from Djokovic gave him a break point, on which Stepanek netted.

Djokovic served for the match and raised his arms as Stepanek’s lob went wide on his first match point. It was Djokovic’s 23rd victory in a row, a run which stretches back to his win over Canada’s Vasek Pospisil in the Davis Cup semifinals in Belgrade two months ago.

Djokovic said: “The match started well for both of us. We served well but this surface is slower than the one I played on in Paris and London. I tried to be aggressive, he was mixing up the pace and the first set was very close. After that I managed to feel better on the court.” Read more

DavisCup: Djokovic's 'Shot of the Day' 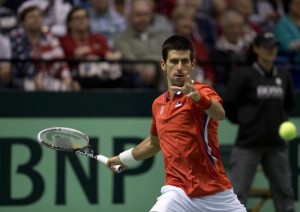 Djokovic will try to extend his win-streak to 24 matches this weeken. Photo daviscup.com

daviscup.com November 14 2013 Belgrade – World No.2 Novak Djokovic has the opportunity to increase his win streak to 24 this weekend but even that may not be enough for Serbia against defending champions Czech Republic in the 2013 Davis Cup by BNP Paribas Final at the Belgrade Arena.

The news that Janko Tipsarevic has been forced to pull out due to a right heel injury sustained in Valencia last month is a blow for the hosts, although it provides a chance for his 23-year-old replacement Dusan Lajovic to become a national hero. Lajovic’s only previous taste of the Davis Cup came in a dead fifth rubber against Sweden in Nis last year. It is a very different experience to the one he will face on Friday when he steps on court in front of 15,500 raucous fans to face Tomas Berdych, which follows the opening rubber between Djokovic and Radek Stepanek.

The hosts hope that Lajovic can rise to the occasion in his first ever best-of-five set match. The world No. 117 has lost all four tour-level matches he has played this year, with his last tour victory coming in April 2012 against Russian Evgeny Donskoy. However, he did win his second Challenger title of the season just two weeks ago in Seoul.

“I would say it’s very exciting,” said Lajovic. “I have been feeling like this since I heard the news. I hope that this positive energy will lead me to play my best game on Friday. To play for your country in such an important match is incredible. “From one side, Tomas will be the toughest player I have ever played. From the other side, maybe the good thing could be that he doesn’t know me so I might have some advantage in the opening games of the match. I just hope that I can give my best and try to surprise him.”

As clear a favourite as Berdych is, it could be a tricky situation for the world No. 7. “There is going to be a bit of scouting,” he admitted. “I’ve never played him, I’ve never seen him play any match but I think the guys around the team and my coach will help me with that. For me the most important thing is to stay focused and play my best.”

Following his victory in the final of the ATP World Tour Finals against Rafael Nadal in London on Monday night, Djokovic immediately boarded a flight and arrived in Belgrade in the early hours of Tuesday. Read more...

daviscup.com November 15 - 17 2013 - The 2013 Davis Cup by BNP Paribas Final sees two of the most consistent nations in recent years going head to head at the Belgrade Arena as Serbia hosts Czech Republic.

Defending champions Czech Republic have made it to the competition's showpiece for the third time in five years and they will take heart from the fact that the final is to be contested on their preferred hard court. Serbia meanwhile are hoping that history does indeed repeat itself as they return to the Belgrade Arena three years after winning the country's first Davis Cup title there in 2010.

With Novak Djokovic and Tomas Berdych leading their respective teams there are sure to be fireworks on the court and there is the added interest that these two nations know each other well having met in 2010 and 2012. 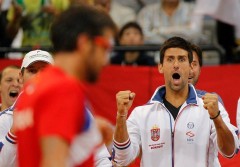 Djokovic will try to dethrone the Czechs. Photo daviscup.com

World No. 2 Djokovic will lead Serbia in its second-ever Davis Cup Final by with Janko Tipsarevic the likely second singles player and Ilija Bozoljac and Nenad Zimonjic probable to play in the doubles. Czech Republic, meanwhile, has named its top three players in the shape of Berdych, No. 43 Lukas Rosol and No. 45 Radek Stepanek as well as the experienced Jan Hajek.

The Final is taking place at the Belgrade Arena on an indoor hard court, with play scheduled to start at 4pm local time (3pm GMT) on Friday 15 November. The draw will take place on Thursday 14 November, in which Friday's line-up will become clear.