Sunday April 7, 2013: ITS Staff, Cebu - Many expected the Davis Cup tie in the Group II Asia Oceana semi-finals, between Philippines and Thailand, to be decided by a fifth rubber on the third day’s reverse singles at the Plantation Bay Resort in Cebu. But the Filipino No.1 Ruben Gonzales, ranked ATP 784, had other ideas.

The Terre Haute-born 27-year old surprised everyone on Sunday when he upset Thai ace world no. 207 Danai Udomchoke with a straight sets 6-4 6-3 6-2 victory in the fourth rubber to secure the tie 3-1.

Francis Casey Alcantara followed by defeating 18-year old Wishya Trongcharoenchaikul 6-4 4-6 6-0 in the dead fifth rubber making the final score 4-1.  The win sends the Philippines to the finals, who will appear for the second straight year, against New Zealand in September.  ﻿ 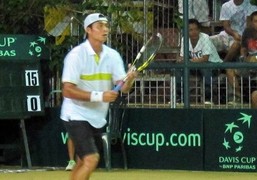 The young Thais were no match to the quickness and experience of the Filipino duo who gave their team a crucial 2-1 lead going into Sunday’s reverse singles. Philippine No.1 Ruben Gonzales will face 2006 Asian Games Gold Medalist and World No. 207 Danai Udomchoke who drew Thailand even on Friday when the 31-year old defeated PCA champion Johnny Arcilla in the second rubber.

A possibility can leave 33-year old Arcilla and Thai Wishya Trongcharoenchaikul, who turns 18 on Monday, playing against each other in the decisive fifth rubber for a place in the Group II finals in September against New Zealand. The Kiwis advanced to the finals over Pakistan on Friday due to a controversial ruling as a result of an unplayable court in Mayanmar (story below).﻿

Friday April 5, 2013 - Philippines and Thailand drew even 1-1 in their opening rubbers on Friday of the Davis Cup Group II Asia-Oceania semi-final tie held at the Plantation Bay Resort in Cebu, Philippines. Filipino No.1 Ruben Gonzales took the lead for the hosts with a 6-7(6) 6-4 3-0 victory over Thai No.2 Wishaya Trongcharoenchaikul who had to retire due to severe cramps.

News around the web

Philstar.com: Gonzales out to fire up Phl vs Thai No. 2 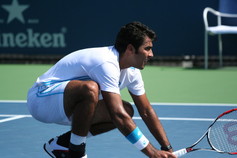 April 5, 2013 ITS Staff: Myanmar - In a bizarre twist New Zealand has won their Davis Cup Group II Asia Oceania Group semi-final tie against Pakistan in Myanmar, by default, after a controversial decision by the ITF referee Asitha Attygalla from Sri Lanka called the contest unplayable awarding a 4-1 win to New Zealand as a result of the tennis court being unplayable.

The decision was made during the second singles rubber with Pakistan’s Aisam Qureshi ahead 6-3 2-6 3-0 against Daniel King-Turner of New Zealand, after Ageel Khan of Pakistan took the opening rubber 7-5 3-6 6-2 7-5 over Arlem Sitak of New Zealand.  The referee awarded match and the remainder of the tie to the New Zealanders for a 4-1 win.

Pakistan, who had the choice of venue, held the Tie in a neutral country due to instability in their home country making them responsible in adhering to ITF rule on venue and its playability.

In statement quoted by the New Zealand Herald, team captain Alistair Hunt of New Zealand said, "The courts have been a disaster from the start. We've changed each grass court and then there was some word we might change to hard court which the ITF said no to. The referee has made a brave decision. Obviously all the guys wanted to play and you don't want to win this way."

New Zealand will advance to the final to face either Thailand or Philippines in the final of Asia-Oceania Group II in September.﻿﻿

News around the web

Stuff.co.nz: Tennis court not up to par