Ties and Rubbers - what it means... 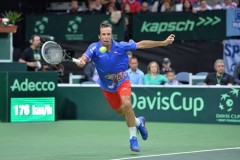 Each of the three regional zones is divided into four groups. Groups I and II play elimination rounds, with the losing teams facing relegation to the next-lower group. In Group III and Group IV competition, each tie ("round") consists only of 3 rubbers ("matches"), which include 2 singles and one doubles rubber, which is played in a single day. The rubbers are in the best-of-3-set format, with a tie breaker if necessary to decide all three sets.

Each tie consists of 5 rubbers ("matches"), which are played in 3 days (usually on Friday, Saturday, and Sunday). The winner of the tie is the nation which wins 3 or more of the 5 rubbers in the tie. On the first day, the first 2 rubbers are singles, which are generally played by each nation's 2 best available singles players.

On the second day, the doubles rubber is played. On the third day, the final 2 rubbers are typically reverse singles, in which the first-day contestants usually play again, but they swap opponents from the first day's singles rubbers.  However, in certain circumstances, the team captain may replace one or two of the players who played the singles on Friday by other players who were nominated for the tie.

For example, if the tie has already been decided in favor of one of the teams, it is common for younger or lower-ranked team members to play the remaining dead-rubbers in order for them to gain Davis Cup experience.

Venue and Order of Play

Ties are played at a venue chosen by one of the competing countries. The right of choice is given on an alternating basis. Therefore countries play in the country where the last tie between the teams was not held.

In case the two countries haven't met since 1970, lots are drawn to determine the host country. Prior to each tie, the captain of each nation nominates a squad of four players and decides who will compete in the tie. On the day before play starts, the order of play for the first day is drawn at random.

In the past, teams could substitute final day singles players only in case of injury or illness, verified by a doctor, but current rules permit the captain to designate any player to play the last two singles rubbers, provided that no first day matchup is repeated.

There is no restriction on which of the playing team members may play the doubles rubber: the two singles players, two other players (usually doubles specialists) or a combination. Each rubber is normally played in a best-of-5 set. The first four sets use a tiebreak if necessary, but the fifth set usually has no tiebreaker, so play continues until one side wins by two games (e.g. 10–8).

However, if a team has clinched the tie ("round") before all 5 rubbers ("matches") have been completed, the remaining rubbers may be shortened to the best-of-3-sets, with a tie breaker if necessary to decide all three sets.﻿