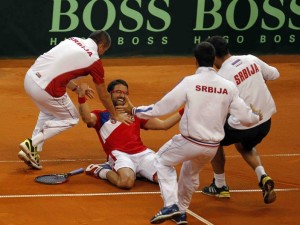 daviscup.com: September 15, 2013 Zoran Milosavljevic: Belgrade, Serbia - Davis Cup by BNP Paribas 2010 winners Serbia marched into the competition’s 2013 final after Janko Tipsarevic subdued Vasek Pospisil 76(3) 62 76(6) in the decisive rubber to complete an epic 3-2 win over Canada in Belgrade’s Kombank Arena. Earlier on Sunday, world No. 1 Novak Djokovic put Serbia on level terms after beating Milos Raonic 76(1) 62 62 with an effervescent performance which pumped adrenaline into a passionate 15,000 home crowd ahead of the final act.

The Serbians will meet old rivals Czech Republic at the same venue in the November 15-17 final after the Czechs went through the motions on the final day of their semi-final against Argentina, having secured an unassailable 3-0 lead on Saturday before losing the reverse singles. Djokovic drew first blood in the opening set when he broke Raonic to take a 4-2 lead, but the towering Montenegrin-born Canadian responded straight away to stay on an even keel until the tie-break, when Djokovic seemed to move up a gear and garnished his barrage of unstoppable shots with a delicious lob as he nosed ahead in the match.

The Serb let his emotions show when he made an early break in the second set count, raising both arms while letting out a loud roar after saving three break points to go 3-1 up. With Djokovic being able to tame Raonic’s big serve as the match wore on, there was little the 22-year old Canadian could do to stop the Serb from asserting complete control of the slugfest. Djokovic broke again to lead 5-2 and then served out for the set, finishing it with a lovely crosscourt forehand which left the bedazzled Raonic wrong-footed.

The atmosphere reached boiling point midway through the third set, with Djokovic dispatching a myriad of superb shots, including another delicious lob, to conjure a 3-0 lead and leave Raonic resigned to his fate.  Full article

daviscup.com: September 14, 2013 Zoran Milosavljevic: Belgrade, Serbia - Daniel Nestor and Vasek Pospisil ground out an epic 6-7(6) 6-4 3-6 7-6(5) 10-8 win over Nenad Zimonjic and Ilija Bozoljac in Saturday’s doubles to give Canada what could turn out to be a vital 2-1 lead in their Davis Cup by BNP Paribas semifinal.

The home team squeezed through in a rollercoaster opening set, in which the rivals traded breaks before Canada came agonizingly close to taking it after earning a 6-3 lead in the tie-break. The Serbs reacted superbly, winning five points in a row to delight a passionate 8,000 home crowd in the Belgrade Arena, with the visiting supporters temporarily silenced.

Sporting drums and national flags, they were on song again when Canada replied with a break of Zimonjic serve in the second set to tie the score in the delicately balanced tie. Superb volleying and passing shots by Bozoljac restored Serbia’s advantage, as his backhand through the middle broke Nestor in the sixth game of the third set and enabled the home crowd favorites to get back into the driving seat. Full article 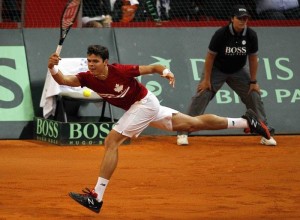 Raonic drew even with win over Tipsarevic. Photo daviscup.com

daviscup.com: September 13, 2013 by Zoran Milosavljevic - The Davis Cup by BNP Paribas semifinal between 2010 winners Serbia and this term’s dark horses Canada appears set to go down to the wire as an epic after a pair of contrasting opening singles rubbers on Friday left the teams deadlocked 1-1. With Canada trailing 1-0 after world No.1 Novak Djokovic brushed aside the bewildered Vasek Pospisil 6-2 6-0 6-4 to put the hosts in the driving seat in Belgrade’s Kombank Arena, 22-year old Milos Raonic dug deep into his resources to redress the balance with a thrilling 5-7 6-3 3-6 6-3 10-8 win over Janko Tipsarevic.

The result improved the Montenegrin-born Raonic’s perfect record against Tipsarevic to 4-0 and silenced a vociferous home crowd, while it threw into raptures a small but vociferous and colourful band of Canadian supporters sporting scores of national flags. Raonic appeared set for a walk in the park against Tipsarevic as he hit one winner after another to conjure a total of 11 early on and took a 3-0 lead in the opening set, but his effervescent display made way to some erratic shots while the home crowd favourite regained his composure. Tipsarevic recovered superbly to take the opening set and although Raonic claimed the second, the Serb again swung the pendulum in the third with a myriad of unstoppable groundstrokes which had his opponent dashing in vain from one end of the court to another. The Canadian returned the favour in the fourth set to set up a dramatic and strength-sapping fifth, in which he saved a match point in the 10th game before he finally outgunned and overpowered Tipsarevic in four hours and 11 minutes of rip-roaring tennis. Full article > Live Scores 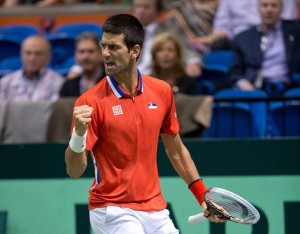 Djokovic gave the hosts a 1-0 lead on Friday. Photo daviscup.com

Reuters: September 13, 2013 by Zoran Milosavljevic - Serbia took a 1-0 lead over Canada in their Davis Cup semi-final after Novak Djokovic beat Vasek Pospisil 6-2 6-0 6-4 in the opening singles rubber on Friday. Roared on by a partisan home crowd in the Belgrade Arena, world number one Djokovic strolled to victory in one hour and 44 minutes to put 2010 winners Serbia in the driving seat. The 26-year old from Belgrade looked a little weary in the first three games after a long-haul flight from New York following his US Open final defeat by second-ranked Rafael Nadal, but it was one-way traffic once he found his feet on the indoor red clay surface.

A small but vociferous band of visiting fans, sporting several large Canadian flags, cheered every winning shot Pospisil could muster but it was the home crowd who were on song after Djokovic wrapped up the match when Pospisil slammed a forehand into the net. Janko Tipsarevic, who returned to the Serbian squad for the tie after a 16-month absence from the Davis Cup, faces big-serving world number 11 Milos Raonic in Friday's other singles. The winners will play either holders Czech Republic or Argentina in the Nov. 15-17 final. 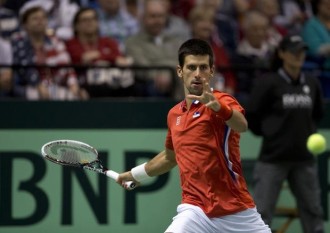 World No.1 to lead Serbia against Canada. Photo daviscup.com

daviscup.com:  September 12, 2013 Zoran Milosavljevic: Belgrade, Serbia - Repeating the 2010 feat, when Serbia won the Davis Cup by BNP Paribas, will be the only thing on Novak Djokovic’s mind when the World No. 1 takes centre stage in Friday’s opening singles rubber of what should be an enthralling semifinal tie against Canada in the Belgrade Arena. Looking fresh and upbeat at Thursday’s draw after a long-haul flight from the United States after a tough US Open final defeat by Rafael Nadal on Monday, Djokovic said he was looking forward to the tie’s curtain-raiser against Canada’s Vasek Pospisil.

“It’s not the first time I’ve had just two days to get ready for the Davis Cup after long-haul flights,” Djokovic told a news conference after the draw in the 18,000-seater. “The 2011 experience was not a great one when I faced del Potro in the semifinal against Argentina because I was injured, apart from being exhausted, and we lost the tie.” 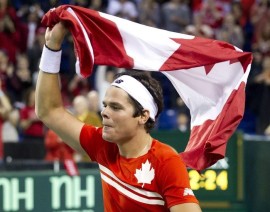 “I am tired and jet-lagged as I couldn’t get here before Wednesday, but I am fit now and we haven’t played at home in the Davis Cup for two years. Hence I am as motivated and inspired as ever to play for my country in this team event,” he said. Janko Tipsarevic, who has returned to the Serbian squad after a lengthy 16-month absence, faces Milos Raonic in Friday’s second singles rubber and  hopes for a change in fortunes against the big-serving 22-year old born in Montenegro’s capital Podgorica, who has won their previous three meetings. “He is one of the biggest hitters in the game and if I can tame his serve I should have a fair chance because the red clay should suit me more,” said Tipsarevic. Full story